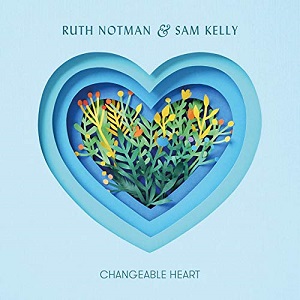 
I can't be the only one who had thought that the medical world's gain had been music's loss as, after releasing her second album The Life of Lilly¸ Ruth Notman went off to study for initial and then postgraduate medical science degrees, culminating in her taking up a position at the University of Sheffield medical school as a Physician Associate. Thanks to the intervention and out-of-the blue contact of Sam Kelly, a long-time admirer of her work and talent, "In my mind it was depriving the folk scene with her not performing", however, a new creative relationship was formed.

Changeable Heart is the first recorded offering from this talented pairing, a majestic release exemplifying the very best in contemporary folk music.

To provide a little contextualisation, in 2007, having been a finalist in the BBC Radio 2 Young Folk Awards, (in a duo with Bryony Bainbridge), Ruth released a solo debut album Threads which received accolades from both major publications, including The Independent, The Guardian and Mojo and folk legends such as Nic Jones and John Tams.

Over the intervening years, Sam Kelly has also been carving a more than sizeable niche and reputation within the folk milieu. Winner, as a solo artist, of the 2016 BBC Radio 2 Folk "Horizon" award for emerging talent, his group Sam Kelly & The Lost Boys were nominated for "Best Group" in the 2018 Awards, whilst much-lauded work with Cornish collective The Changing Room, his involvement in The Company of Players and BBC Radio Ballads of The First World War projects, together with playing, or producing with the likes of Phil Beer, Kitty McFarlane, Seth Lakeman and Jamie Francis, have kept him both busy and in the public eye and ear.

There is much to suggest, not least in the accompanying art work, that this is an album all about love, but not love of a simplistic one-dimensional kind, rather a love in all of its multi-faceted complexity across a wide-ranging spectrum. Thus, we are exposed at one extreme to the earthy ribaldry of The Cunning Cobbler through to the hope of future based on love in the poignant The Island at the other, having also variously tasted love of a fragile, brave and spurned nature along the way.

The album opens with a wonderful arrangement of the traditional English folk song Bold Fisherman and sets down the marker for the rest of the release, with the alluring vocal performances of both Ruth and Sam immediately capturing the attention of the listener and drawing them in.

Arresting as this opener may be, the title track, Changeable Heart, a bittersweet love song and the only one composed by Notman and Kelly together, is a sonorous triumph. The instrumental accompaniment here, which includes tenor guitars, strings, piano, percussion and Moog analogue synth, is beautifully judged and leaves ample room for the voices to shine through, as the song soars and builds to a climax. This track is surely destined for extensive on-air national exposure.

A change of mood and tempo occurs next, as Damien O'Kane's banjo drives a lively version of The Cunning Cobbler. This amusing romp through a cuckolding tale involving a butcher, the butcher's wife, a cobbler, a policeman, a truncheon and a broken chamber pot is delivered with great gusto, presenting the musical equivalent of a Brian Rix Whitehall farce, with added violence.

The next three tracks see arrangements of three staples of the traditional folk canon, and what welcome takes they prove to be. Firstly, Caw The Yowes, collected by Robert Burns in 1794, is introduced by Ruth's delicate piano before she, the shepherdess, and Sam, the shepherd, swap vocals to deliver this love song in a sensitive manner which evinces images of Arcadia. Sam then takes lead vocal duties on both Sweet Lass of Richmond Hill and My Lagan Love, the former to a simple piano accompaniment from Ruth. With the latter, the traditional Irish air moves from Sam's distinctive solo vocal to include that of Ruth, before the addition of electric guitar and percussion succeeds in building an atmospheric soundscape. To these ears, this arrangement and delivery is worthy of comparison to any of the plethora of extant versions available.

Another change, as Ruth takes up her piano accordion for her own, short, self-penned As You Find Your Way Home, a gentle song which fully highlights her vocal abilities, before another variation in both tempo and mood as the jaunty, upbeat story of Young Brian of the Sussex Wold, allegedly another traditional tale, this time involving princes, sieges, archers, maidens and a Ruth!

The duo has chosen to close the album with two covers. Their sparse version of Ewan MacColl's School Days Over, the moving song ostensibly concerning the loss of childhood and the coming of age, with John to the pit, Jim to the mine and Dai to the colliery, features Ruth's mournful harmonium, a perfect adjunct to both the plaintive vocals and lyrics. The final track, a reading of Paul Brady's 1985 political anthem The Island is equally impressive. The shared vocal duties provide further evidence as to the quality of their voices, which blend together seamlessly.

Changeable Heart is a stunning album. The duo, (not forgetting the considerable input from Damon O'Kane), have succeeded in not only breathing new life into traditional songs, and in the process indelibly marking them with their own unique stamp, most noticeable vocally, but also have nudged the door slightly ajar to reveal a glimpse of their own song-writing potential as a collaborative.

It doesn't take a crystal ball to predict that this release will be pencilled in for end-of-year 'Best Of' nominations, and quite rightly so. Highly recommended.