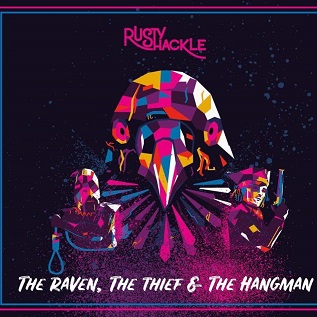 Rusty Shackle
Album: The Raven The Thief And The Hangman
Label: Get Folked
Tracks: 9
Website: http://www.rustyshackle.com


Rusty Shackle on The Raven, The Thief And The Hangman, their forth album, smoulder with that big Memphis bass of Alabama Shakes and the electric mutant blues of the White Stripes. Like a Folk Rock Stereophonics they just ooze rock n roll swagger, as much sons of Beggars Banquet Stones as Steeleye Span. Hanging Johnny has a riff to die for and vocals that are part Sea Shanty harmonies, part blues growl.

The bass line is a speaker troubling monster masterpiece. The bands version of Sam Hall is another incendiary masterpiece, very much Rock Folk rather than the other way round. For the last two years Rusty Shackle have been researching folk music, libraries, manuscripts and interviews for source material. The result sounds more like The Clash with that insistent back line or a widdly solo free Lynyrd Skynyrd with that guitar sound.

The music just burns and screams from the speakers. Newport Rising, marries an infectious beat to the story of Chatterists marching on the Welsh town in 1839. Long John sets some louche group vocals against bluesy guitar and fine fiddle. Part sea shanty, part White Stripes dirty modern stomping blues. Holy Ground is the more acoustic gentler side to The Rusty Shackles, there is still a power and a tension, but the song is led by jangling acoustic and percussion with a beautiful soaring folk rock violin. It would segue perfectly into Thin Lizzy's Whisky In The Jar. Coorie Doon, wobbles with the sense of an after hours pub lock in, the heartfelt but woozy vocal and the one bottle too many piano build a vivid atmosphere.

The Raven's Song is a master collision between the playfulness of The Small Faces and some of Country blissed out experiments by Traffic or Heron. Rusty Shackle bend the American classic St James Infirmary, adding their own verses to the chorus, while maintaining the funeral sense of melancholy. The music is part banjo County blues and part Rusty Shackle electric rock swagger.

The music is tight and ever so slightly psychedelic with a sense that band could lean back and lock into a real groove on this live. Time Of Death features the bands distinctive vocals, but the chorus has the edge, cadence and bite of rap. Wonderful spaghetti Western like use of spoken voice and vocals in the middle too.

Superb album from a Rock Folk band who bring the bite and swagger of The Stereophonics or The Arctic Monkeys to traditional material and trad sounding ballads, creating a monster sound with fire energy and vitality.