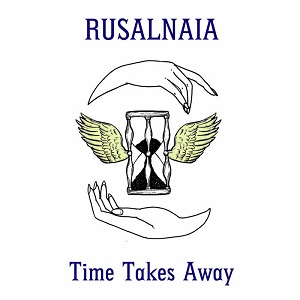 
Rusalnaia is an intense musical partnership between two close friends with a shared musical aesthetic: Sharron Kraus and Gillian Chadwick. (For those who simply insist on knowing such things, it's named after a festival that honours and placates the Rusalki, mischievous water nymphs from Slavic mythology, through song, dance, tree-decorating and wreath-making…) Sharron and Gillian first came together when neighbours in Fishtown, Philadelphia, exploring and overlapping into each other's musical territories with intriguing results.

In 2008 Rusalnaia released its landmark, eponymous debut album (produced by Espers' Greg Weeks) on the Camera Obscura label. That record was a triumphant essay in eerie pastoral folk that created its own remarkable and original, if strange and other-worldly ambience variously conjuring echoes of arcane pagan ritual and contemporary acid-folk writing. It's a disc to which I've returned often, and it's a real pleasure to receive a followup album at last from this uncannily symbiotic duo. For its creation, the pair got together in Ysbyty Cynfn in deepest Wales, where Sharron had moved to for a while (before relocating to Sheffield more recently). We're told that key inspiration was derived from spending nights in front of a woodburning stove and taking moonlit graveyard walks, and this time production duties fell to Michael Tanner (of Plinth and United Bible Studies).

Time Takes Away is every bit as bewitching as its predecessor, yet it may not yield up its riches quite as readily, for its musical climate is moodier and more opaque for much of the time. The largely exotic-acoustic-based settings of Rusalnaia's debut album have yielded to an altogether heavier primary backing involving frequent use of drumkit (courtesy of guest Mark Wilden) and replete with electric guitar texturings, whose slight air of fuzziness may often require the listener to be more attentive in order to penetrate the fog and reveal the wild, primordial poetic power of the lyrics. These positively celebrate femininity and female empowerment while exploring themes relating to the passage of time, new beginnings and the demise of old relationships (here including, specifically, the breakdown of their erstwhile, inspirational musical community in Philadelphia).

Less elvish doom than spiritual folk-alchemy, the whispersome incantation of Cast A Spell, whereby the female spirit bewitches the lover, explodes at its climax into the heaviest of guitar riff workouts, sealing the orgasmic experience. Weird psych-rock keyboard tones cloak the wishful entreaty of Take Me Back, while the wandersome close-harmonised vocal line of Driving meanders down that age-long road with its eternal simple scenario. The Love I Want enwraps its vocal interplay within a recorder-bedecked expression of yearning that breathes and resonates folk tradition while set against a grinding guitar-bass-drums riff. The deep grunge of The Beast within crashes, prowls and rages but fails to undermine the self-confidence of the female protagonist, expressed in a curiously effective, vulnerable vocal arrangement where the ladies' individual voices pitch and toss around each other. This striking vocal feature recurs throughout the album in a telling combination of concord and discord that emanates from the incredible empathy the two voices have achieved through their owners' close friendship. The "quietest" of the songs (in terms of backing, that is), the uneasy yet cloyingly reassuring Lullaby (For A Future Generation) and the disturbingly visionary The Honeymoon Is Over, are truly mesmerising, and are succeeded by the album's title song, an ostensibly idyllic reflection of eternal togetherness that nevertheless leaves a vaguely disorientating taste in the ears and mind.

From the above assessment of Time Takes Away, it might be hard to get a handle on the album's potent aura of slight elusiveness, but I might mention names like Mellow Candle, Spirogyra, Principal Edwards Magic Theatre and Comus, indeed anything under the more general banner of cultish wyrd folk, invocation of which might bring you close to imagining the cogent vibe of the music - even though in the final analysis it doesn't really actually sound much like any of those. For yes, time takes away - although it can still pay back and return considerable riches, as Sharron and Gillian so persuasively demonstrate.