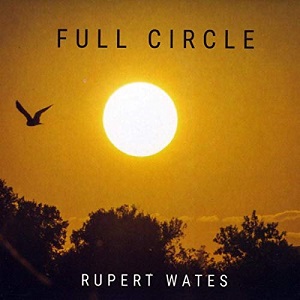 
The first time I came across the name of Rupert Wates was when he performed a gig with a New York musician friend of mine, Toby Tobias. The next time I heard his name was when his latest album, "Full Circle" dropped through my letterbox for me to review.

London born and Oxford educated, Rupert has lived in the United States since 2006 and seems to spend most of his time performing his own brand of melodic folk pop, all of which he delivers with class and a considerable degree of skill.

This latest album his tenth, features just Rupert's guitar and his voice in sympathetic harmony. His guitar playing is as good as it gets matched by his skill as a songwriter. All eleven songs on offer here have been written by Rupert.

He claims to have been brought up listening to John Martyn and Joni Mitchell amongst others and their influence can be heard through the strings of his guitar and his gentle vocals.

He is a brilliant lyricist with the ability to paint pictures in the listener's mind with subtle brushstrokes, all accompanied by some wonderful finger style acoustic guitar work. Much of his work has been recognised by the US music industry from which he has received numerous accolades and awards both for performing and for his songwriting.

Due to the stripped back nature of the music here, you will feel that Rupert is in your front room singing, very personally, just for you. It is a quite remarkable gift. His songs and his guitar are treated with great tenderness all of which come together in perfect synchronisation in the opening track "I'm Amazed." A superb opener to this delightful album.

With just a touch of Gordon Lightfoot, the music takes the listener on a magical journey of clever meaningful lyrics and incredible guitar accompaniment. "Ballad Of A Brown Eyed Girl" is a typical example of Rupert's outstanding musical skill and talent.

All in all, this is an album to be treasured from an artist that fully deserves the recognition that he has already received and will no doubt do so even more in the future.

I have been very fortunate this week to have been sent two outstanding albums from two singer/ guitarists to review, both of which have helped to lift my musical week to new heights of appreciation and enjoyment.