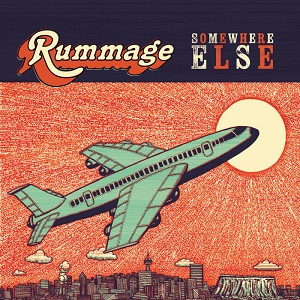 
'Rummage' is one of the many projects from Scottish musician Mark Mulholland. For this CD 'Somewhere Else' he teams up with two friends and long time collaborators, Rusty Miller and James Finch Jr.

These three are proper old-fashioned musical troubadours, who have worked all over the world on numerous musical projects as individuals, as part of other groups and on each other's recordings. Their history is far too complicated to cover here, so I suggest the interested reader checks them all out individually. I have and it's certainly worth the effort!

However, with reference to this release, Mark met Rusty Miller, a songwriter and multi instrumentalist from Northern California, in the early 1990's. Mark then became friends with guitarist James Finch Jr in 2007 and James worked with Mark on his second solo album, 2011's 'The Cactus And The Dragon'.

They had been promising to record as a trio for some time and this came to fruition in 2014 when they booked themselves into a studio near San Francisco for five days. Working up to eighteen hours each day, the result was the twelve songs that became 'Somewhere Else'.

Given the trio's eclectic background and noting the array of instruments played here, I honestly had no idea of what to expect with this album!

Well, 'Ebb And Flow' barges in on a distorted, overdriven guitar riff backed up by some truculent drumming before everything and the kitchen enters. Epic stuff! After about thirty seconds of this, Mark comes in with the vocal. He has quite a slight voice buried deep in the mix, but despite this, it has lots of quirky character. The whole nature and vibe of this track conjured up images of Bob Mould's band Sugar or the grunge of Dinosaur Jr from way back in the 1990's, whereas vocally Mark also reminded me of Badly Drawn Boy. This is a fine opening song.

'Give Me A Ride' has a lovely drum, piano and bass intro which saunters in very stylishly and rolls along on Mark's Bob Dylan circa 1960's vocal.

At this point, four songs in, this music defies easy categorisation but it is still a joy to hear all the bases covered, the little musical cameos and homage's within the songs.

Given all this variety, I imagine personal favourites are going to be equally wide ranging, so I will just talk in a little more detail about a couple of mine.

'Claret Blue' on the other hand has another distorted, dirty, riffed intro with Mark's voice again way down in the mix before it settles into being a cracking pop song, all catchy hooks and sweet solos.

This is a difficult album to review and place in terms of genre and target audience, although I imagine Mark has a core fan base that are used to his musical restlessness and will follow all his projects.

As stand-alone tracks, each song is undoubtedly full of fun, great ideas, creativity and musicianship. Equally, the recording and production are faultless. However, its diversity may be something of a draw back and at times, it almost feels like a very good record label compilation album.

I suspect that is missing the point though and in reality this record is really about three good friends, who also happen to be extremely talented musicians, having a great time together. Luckily, it's not a private party and there is more than enough here to let the listener join in the good times.