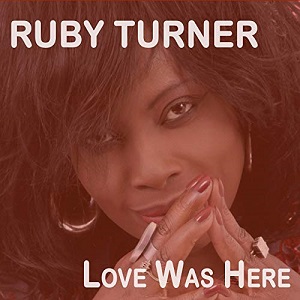 
Ruby Turner arrived in the UK from her native Jamaica with her family in 1967. Her musical career took off in the 1980's when she sang with Culture Club and was immediately recognised as a singer with an extraordinary talent.

Her success and longevity is recognised with this new CD, her 20th album release proving that class is permanent. She has been blessed with an amazing voice which allows her to transition between pop, soul, gospel and R&B with an ease that is almost unique. That great talent developer, Jools Holland, recognised this some time ago and includes Ruby in most of his tours. She also has her own band appearing regularly at Ronnie Scott's; a sure sign of true sustainable quality.

"Love Was Here" is Ruby's latest studio offering and affords her the opportunity to show off her vocal adaptability to its best. Opening with a track borne from pure "pop" "Got To Be Done" and finishing with the film track "Chasing Love" from the forthcoming "The Host" starring Derek Jacobi, this album explores the tones and subtlety of this extraordinary voice. The final track could have been taken straight from a Bond film with its powerful vocals.

Ruby has been heavily influenced by artistes such as Curtis Mayfield, BB King, Al Green and Ry Cooder and I am certain that all four would be thrilled to have a voice as good as Ruby's.

Switching from a power ballad to a rocking number is plain sailing for Ruby and each style of music is delivered with an ease that must be the envy of many. The title track "Love Was Here" is a beautiful slow heartrending song about losing love and is sung with soft and gentle emotions, showing once again Ruby's great versatility. This is possibly my favourite track on the album and one that will remain in the memory for a long time to come.

The album was written and recorded with Nick Atkinson and Kat Eaton and was originally intended to be a 4 track EP. Lovers of Ruby's music and those that are not familiar with it, should be forever grateful that the songs kept flowing over an 18 month period and ended up with this eleven track album of sheer quality.

Having been a fan of Ruby's for many years, I firmly believe that this latest offering will again remind current fans of her pure unbridled vocal talent and introduce her voice to a whole new audience who will hopefully be as blown away by her talent as much as I am.