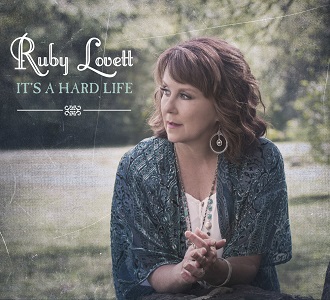 
The title track, on which she sings, "If we poison our children with hatred, then a hard life is all that they'll know" may well have been written by Nanci Griffith, but it could well have spoken to Lovett's own experiences, born in 1967 to a 14-year-old girl in Mississippi. Fate, however, took a different path when she was adopted a week later by an older couple, growing up on their farm, poor but happy, and discovering country music, cutting her first record when she was just six. Her debut album, produced by Garth Brooks and Allen Reynolds was released in 1998. However, when the lead single 'Look What Love Can Do', a song about growing up adopted, flopped, she was dumped by the label. She independently released an EP in 2003, but it's taken 20 years for this follow-up album to appear, during which time she developed and overcame a drinking problem.

The waltzalong Griffith's number opens proceedings, reminding of Lovett's DeMent-like warble as she invests all her emotion into the lyrics, as indeed she does throughout, particularly so on the fiddle and steel backed 'A Father's Love', one of four co-writes with multi-instrumentalist and co-producer K.S. Taylor Pie on which she pays tribute to her adoptive father a sharecropper's son with a third grade education but a strong work ethic, a firm sense of moral values and an open heart and a helping hand.

Elsewhere Taylor Pie and Lovett share further credits with the gospel-tinged pedal steel weeping love song 'Straight From My Heart' and (its melody conjuring thoughts of Jesse Colter's 'I'm Not Lisa'), the tender 'They Don't Know,' the pair also teaming with Herb McCullough for the Southern country loping torch 'The Blues You And Me' featuring Gene Elders on fiddle. He's also flies solo for colourful character bluegrass midtempo stomp 'Riley Bring Your Fiddle' (Elders again naturally prominent) while he and McCullough provide the album closer with the gently picked 'Walking On The Moon' about finding self-confidence ("I'll go to sleep with the lights off tonight/Even though I'm scared of the dark").

There's two further covers in the form of Allen Reynolds and Bob McDill's 1971 storysong 'Catfish John' and, Lovett in full Mississippi drawl, 'Home Sweet Honky Tonk' by Jim Rushing and Carl Jackson, the remaining cut being a Lovett co-write with Pat Alger, the old time waltzing 'Where I'm Standing Today' a song about coming through the bad times ("I had sank so completely/There was no space beneath me/And lacking the courage to change") with God's helping hand ("You picked me up from the bottom/Put me right where I'm standing today").At one point she sings "I'm just beginning to stand up straight/Turning my face to the sun." This album reflects the warmth.