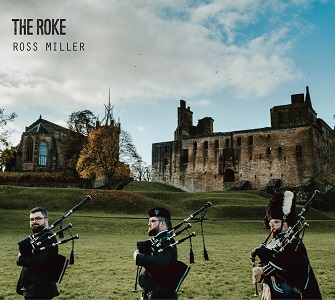 
Ross Miller is releasing this album, his debut on his 25th birthday. THE ROKE is both the debut album and the town tune of The Ancient and Royal Burgh of Linlithgow, where Ross was born and brought up. As official Town Piper this finalist in the 2019 BBC Radio Scotland Young Traditional Musician of the Year presents two very different sides to the tune, he plays each year in procession, on this interesting album. Ross Miller is a dexterous and spirited player of the Bagpipes. He manages to find a beauty in the way he plays and ornaments the tunes throughout THE ROKE. The album is beautifully produced and recorded by Miller, Craig Irving and Gus Stirrat at Solas Sounds. The performers are balanced in the mix, so the powerfully characterful pipes play with rather than over Charlie Stewarts spry fiddle and Rory Matheson's inventive piano acompaniment on the opening "Reels" and "Accidental Belterism" . There are moments where the interplay between Ross and Rory's electric jazzy piano on "Rona's Reel" (I think), put me in mind of those inventive 80s releases by Davy Spillane. "Walka" again is finely balanced so you can appreciate Ross' piping, Craig Irving's strummed guitar, the fiddle and the subtle fluttering of Craig Baxter's Bodhran. "Grannie Betty's" a set of tunes for Ross' Grannie, lets Rory come to the front with expansive, thoughtful piano while Ross accompanies him, which is maybe not what you would expect on a piper's album.

"The Threes Set" features some powerful, passionate playing from Ross, but it also features some interesting studio trickery and showcases Charlie's fiddle and the solid rhythm section of a multi tracked Charlie and Callum Edwards. "Strathspeys and Reel" show Ross playing in a Cape Breton style, with some interesting rhythms around him. "Quartet" gives us multi Bagpipe parts, all played and multi tracked by Ross, giving a fascinating insight into the range of drones and melodies you can summon on the pipes. A more reflective moment is given with the evocative melodies on the "Taobh Loch Èite" set, again room is left for acoustic guitar and fiddle to share the tunes. The "Aye Right" set has a muscular opening and close with the drums and playing suggesting Folk Rock Jethro Tull style as the tension builds steadily through the trio of tunes. Like "Grannie Betty's" Ross and Rory get equal billing on "Mum and Dad's", sometimes sharing the melody between them, sometimes accompanying each other. The title track closes the album, the theme is introduced over a Marching drum. Ross is Linlithgow's town piper and "The Roke" is The Linlithgow Marches tune. Here he presents it first as he plays it for the 6am procession, then Ross and band bend it, like the opening reels into inventive Folk Rock, with some delightful changes of timing and a few musical diversions with Rory's funky electric piano and splashes of electric guitar.

Inventive throughout to the last moment, on the sequence of photos on the cover, the fine portraits throughout and of course the disc itself, Ross Miller looks and sounds confidently pleased with this refreshing album.