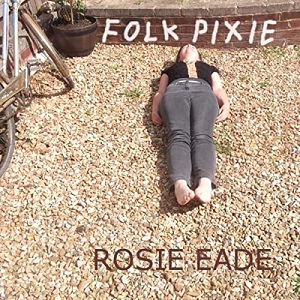 
The first song I heard on this album was "The Fire" because my original download somehow missed the first two songs. So I listened to the song while correcting my (or my technology's) misdemeanour and was immediately struck by the power and range of Rosie Eade's vocal and was keen to listen to more.

Eade's rock influences immediately show through with the opening rhythm of "Battlestorm" reminding me of Breed 77's "Breaking The Silence", but then her voice takes you by the scruff of the neck. Comparisons are not always helpful when musicians are driving their own path forward, but I can certainly hear the vocal metering of Sandy Denny, and inflexions of Patti Smith (and therefore P. J Harvey). This is a really fine song to start with, and the Fairport theme continues with "Crazy Man Michael", which stamps a folk authority on this album with a powerful rendition of Richard Thompson and Dave Swarbrick's original composition. The songs each carry a 'live' feel about them and evoke the spirit of the folk festivals that Eade would normally be gracing with her presence.

A second listen to "The Fire" confirmed the quality of the song, the driving guitar rhythm and the vocal range and control that is so important for such a stripped back album with its focus on the delivery of the lyrics. This excellent song will be an earworm for some weeks to come. The pace slows for the introduction "Mirror" before the Patti Smith influence returns with a breathtaking second section blending rhythm guitar with for me, the vocal delivery of the album.

"Your Face Smiles" is one of those settling songs, the calm after the storm that gives the listener a little space to breathe, absorb and enjoy. The thing that struck me in reviewing this album is that Eade is not afraid to challenge herself with unconventional rhythms and lyric delivery. It's as if her voice is confidently going where she wants it to go, unrestrained by convention and the mood of the song rises and falls.

"Mother" opens with an acoustic guitar riff that has a U2 feel to it, but that's where the comparison ends with a display of vocal range that will be the envy of many a musician. This is the song that marks the boundary of Eade's own "Folk Pixie" territory, backed by guitar work with the confidence and competence of a Keith Christmas record. "No Greater Love" has an anthemic atmosphere to it and would lend itself equally to a band delivery. Similarly, the excellent "Whisky and Betrayal" with its interesting chord sequences and superbly crafted vocal acrobatics, returns to rock themes with the most Denny-like performance on the album.

Eade's version of Pete Townsend's "Behind Blue Eyes" was the surprise of this work. It's one of my favourite Who songs, and as such I was doubtful that this would pass muster, but this is excellent, cleverly retaining Townsend's guitar rhythm style with a simultaneously convincing vocal performance. "Where's the old man gone?" ends the main part of this album with a hint of Natalie Merchant in the vocal, backed on vocals by Randy Abel in an uplifting, semi-comedic song in the style of Steeleye Span. I'm never really sure of the purpose of bonus tracks, but here the welcome inclusion of "Dear Connie" and "Cannot Wake" round off this vibrant collection of folk songs.

If the comparisons drawn haven't whetted your appetite then you are extremely hard to please! This is a terrific album and will take its place in my alphabetical album collection somewhere between Donovan and Steve Earle.