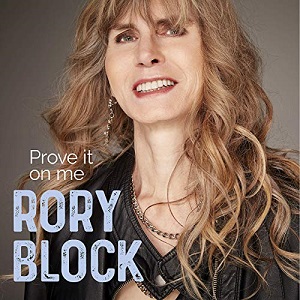 
Rory Block is a new name, not just for me but probably for many other music lovers from this side of the pond. As we share a name, I just felt that I had to review this album.

Rory loves the Blues and sings and plays it with passion and drive. This new album, Rory's seventh in total, showcases her talent perfectly and will open up her musical repertoire to a whole new audience.

"Prove It On Me" is the second album in a series of records produced to celebrate and honour early American female blues artistes and songwriters of this particular genre.

Rory provides a veritable one woman show on this CD. She plays all the instruments, sings all the leads and the harmonies and to finish it off, she has co-produced it too. In addition to this, she has also written one of the tracks, "Eagles." Remarkably, all of these tasks are delivered with a high degree of skill and the vocals are superb too. Her voice goes from raunchy to demure with no loss of clarity. Her guitar playing is exemplary and amazingly versatile. I have been trying to think of a similar female artiste, but have so far failed to come up with a name.

This is a delightfully balanced album and serves to show what outstanding blues music has been written over the years by some amazing female songwriters, all of whom are now long departed. They would however, I am sure, be very pleased and proud of this tribute that Rory has paid them all and ensured that their musical legacy will not die.

The album will be released on the 27th March and followed up by a tour of United States, Canada and Europe, Coronavirus permitting of course.

He May Be Your Man