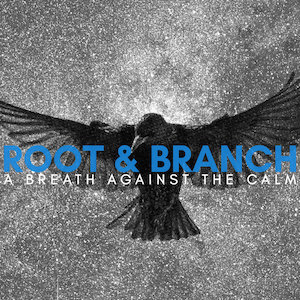 Root And Branch
Album: A Breath Against The Calm
Label: Self Released
Tracks: 8
Website: http://www.randb.org.uk


Root and Branch's debut album starts off with a blistering set of reels which weave from Ireland across the British Isles, 'Big John's Daughter' kicks off the album with ambition and gusto.

The quintet state that they perform ''Traditional music of the British Isles, Ireland and the Appalachian mountains'' which on this album, becomes a diverse concoction of layered droning textures, jigs, reels, harmonies and foot-stomping rags.

'The Road To Germany' is one of only two tracks on here (the other being an instrumental) which have been written by a member of the band, otherwise heavily relying on a mix of Trad and more obscure findings. This particular song tells of a first perspective plight of the crossing of refugees to Europe. A delicate subject which is poignant, full of imagery and delivered with the respect it deserves.

Whilst only eight tracks on the album, Root and Branch certainly pack their sound well on the album and doesn't feel under-sold with the amount of tracks.

Other English trad songs get tackled on the album such as a playful ambiguous rendition of 'Hares on the Mountain' and fairly lengthy 'The Dalesman's Litany' which captures the desperation of the song well. It becomes very hard to pick out stand out material from this album but both these Trad numbers stick out from the Traditional material on the album.

The final song 'Young Hunting' I feel takes a few listens. Apart from being almost eight minutes, at certain points it does feel quite dense with lengthy lyrics and a very slow build up of droning instruments. It certainly takes a few listens to this particular story based song.

Overall, the album is very cohesive in spite of having three separate lead vocalists and an intermingling mix of genres from Irish and British Isles trad to more rag-sounding North American style tunes.. Contemporary folk structures of the songs build and flow across this record and culminates as a very respectable album delivered with exuberance and ambition. I dare say we may hear more great things from these in the future.