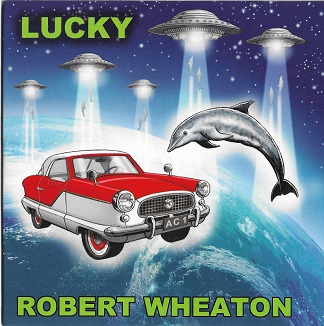 
Robert Wheaton is a well known face on the folk and acoustic music scene in the South West, both as a solo singer-songwriter and guitarist and as a former member of the folk group Devonbird. A couple of years ago he released one of the most entertaining and original albums of the year in "Tomorrow's World , which laid out Wheaton's trademark skills of witty, sardonic and insightful lyrics with some brilliantly thought out instrumental arrangements.

He is back with a new album, "Lucky", which displays all of the same characteristics - but in an even more deft and sophisticated way.

The first track, "Alma Cogan's Car", is a great opener for the album. It tells a fabulous, intriguing story to a catchy tune complete with Mariachi-style trumpet. It sent me straight to Google to see if I could find Robert's source for the story - but no luck, so I'll just take his word for the veracity of the story!

"Lucky For Me" brings in elements of science and philosophy to what turns into a beautiful, sensitive love song. This is followed by "I Hope You're Happy Now" which balances it perfectly with its narrative of a miserable failed relationship. Both songs feature arrangements that put Robert's acoustic guitar in the foreground but have subtle background additions of harmonica , double bass and other strings and things that create real atmosphere and depth.

The next song is a perfect example of how Wheaton can compose a song from the most unexpected of concepts. Narrated in the voice of a whale or dolphin, it deals with an imminent mass exodus of other species to another world, provoked by humanity's creation of a contaminated world not worth staying in. The creatures abandon the world with the farewell "Good Luck, and thanks for all the fish!" A totally serious theme full of Wheaton's characteristic sense of humour.

Dolphins also make an appearance in "Recurring Dream" - a wistful fantasy constructed to contrast with the dreary reality of modern urban work-life. A bit of Rock 'n' Roll next in "You Weren't There To Tell Me What to Do" which skilfully combines an uptempo catchy tune with a dark depiction of drink, domestic abuse and unhappiness. Liz Pannell's violin on "Half Past Two" is reminiscent of Dylan's "Hurricane" and adds a new colour to the sophisiticated instrumental sound palette cooked up by George Arnold at Rapunzel Studios.

The album ends with another rocker - "Ten Years", the only track not to feature acoustic guitar and there is something in Robert's delivery and the tempo here that reminds me of Suggs and Madness. Robert sings in a similar way - not a huge vocal range perhaps, but always crisply delivered lyrics and a great sense of phrasing.

Robert Wheaton is a masterful lyricist who manages to come up with unexpected twists and rhymes all over the place. He keeps finding new viewpoints to tell old stories and also has plenty of new stories to tell. This is thoroughly enjoyable album that is now a fixture on the CD rotation in my car!