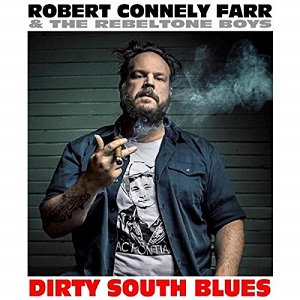 
Robert Connely Farr is a singer-songwriter originally hailing from Mississippi, but currently residing in Vancouver, Canada. Robert writes and performs as a solo act under his own name, as well as fronting the Vancouver based Southern Rock-Alt Country band Mississippi Live & The Dirty Dirty, who together have released 3 studio albums and one EP.

In 2017, Robert met Mississippi blues man Jimmy 'Duck' Holmes who began mentoring him in the 'Bentonia Style' of the blues, a style Jimmy learned directly from Henry Stuckey, who taught Skip James and Jack Owens, and then in 2018 Robert teamed up with Canadian producer and songwriter Leeroy Stagger to record an album of the songs written during his tutelage. Of the ten songs that make up 'Dirty South Blues', eight were written by Robert, one is a co-write with Jimmy 'Duck' Holmes and the one cover is the Skip James standard, 'Hard Time Killing Floor Blues'. Robert supplies guitar and vocals throughout, while the 'The Rebeltone Boys' consist of Evan Uschenko, lead guitar, Tyson Maiko, bass, Kyle Harmon, drums and Michael Ayotte, keyboards.

Opening track 'Ode To The Lonesome' shuffles in on a crisp rhythm part and acoustic picking that support a sharp, brittle lead guitar line sounding almost African in feel as Robert's delightfully ragged voice intones on the top of the mix.

It's hard not to expect yet another earnestly faithful copy of Skip James's 'Hard Time Killing Floor Blues' but the version here is a creative revelation. I think it is probably the only take on the song I have heard that does not include the signature riff and Robert pays scant regard to the songs basic melody, so much so that I had to confirm I was listening to the correct song by checking the lyrics. Instead, the song saunters in on percussion, reverbed guitar and keyboard swells with the sort of stately feel that conjures up 'The Band' at their finest. This take may upset a few blues purists but I think it is marvellous re working.

'Just Jive' definitely breaks any reverie and verges on the edge of contemporary country-rock, 'Cypress Tree Blues' is back to more familiar riff heavy territory, 'Yes Ma'am' is another less of the blues and more of 'The Band' in feel and album closer 'Hey Mr. Devil' is a suitably slow, brooding number full of bumping bass, sharp drums and spiky guitar fills, all topped off with another yearning vocal from Robert.

Robert Connely Farr's excursion into the blues is a real success. Although much is made about his mentorship in the 'Bentonia Style' of the blues, to my ears he also brings other influences to bear, not least the Southern Rock - Alt Country sound of his other band, Mississippi Live & The Dirty Dirty.