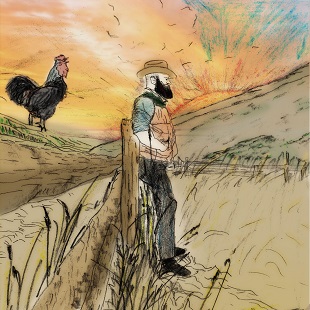 
Based in Spokane, Washington, and with the five-man lineup having a primarily military background, this is the Red Dirt styled jam band's third album and one which draws heavily on the past five years in Walden's life, growing up in Alaska, military service, being an athlete, a pre-band stint as a solo artist and divorce and finding new love. It packs in a lot.

Recored live, things kick off with the unaccompanied close harmony intro to '50 Days Too Late' before breaking out into a classic country stomp about old fashioned values being out of synch with modern life with its outlaw hints of Willie and Waylon. Propelled by a thumping drum beat and ringing guitars, 'Dark Days is a defiant bring it on divorce number ("I ain't afraid of the devil and I sure ain't afraid of losing you") while horns add extra colour to the five-minute 'Chains and Shackles' with its chain gang clanking opener and a lyric that would seem to, at least in part, to also explore breaking free of a fettered relationship.

The brass section hangs around for the slow march soulfness of the salvation-laced ballad 'Thank God For You' and the frisky train time and twang of 'I'm To Blame' with its self-destructive 'true story' of playing music, women, booze and drugs. The self-described chickin' pickin', speed-singing flurry of 'Take Me Back' throws itself full pelt into the dating scene, throwing in a Charlie Sheen reference and bass line run along the way before (following a screw up start) the Johnny Cash acoustic chug title track heralds a new dawn , followed immediately by the piano waltzing euphoria of 'Falling Again, In Love' duet with Jordani Sarreal.

From hereon in, the lyrical mood is all sunshine after the storm, even if (as 'How Long It Takes' notes) it takes time for the clouds to part, rolling on through the resonator-coloured uplift of 'Spokane's Calling You' with its shimmering cymbals crashing on the shore, the goodtime brass and pedal steel-driven Texas swing of 'That's How I Start My Day' and the metronic slow sway 'Love You Anyway I Can' before it drawls into the night with the gentle, cosmic country tinged vision of a 'Big Sky Country' that, rising to anthemic horns and elettric guitar solo, brings the album full circle back to the southern values of the idealised, earlier America he sang of at the start. This little Red Dirt Rooster has plenty to crow about.

Take These Chains From Me (Ben's Song)