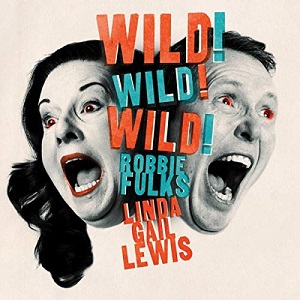 
A firecracker combination, Grammy-nominated singer-songwriter Fulks joins forces with Jerry Lee's younger sister for an album of old school rock-and-roll, country-and-western, rockabilly, swing and gospel that takes you back to the dance floors of the 50s but keeps its eye very much on the present.

Fulks is the creative anchor, producing arranging, singing, playing and writing most of the songs, but this is very much an equal musical partnership when it comes to performance. It's Lewis who leads the charge, pounding the piano for the autobiographical 'Round Too Long' ("I'm the sister of a hellraiser, the daughter of an old tomcat"), singing about drowning in a sea of whiskey and being fast and wild like "a record that won't wear out" in a way that convinces you she means very word.

The style swiftly shifts as Fulks take lead on old school honky tonk of 'I Just Lived A Country Song', namechecking Willie, Merle and Hank on another number about living the life. Things stay country, loading up the pedal steel to duet in classic fashion on 'That's Why They Call It Temptation' before Alex Halls' drums lead things back to rock n roll country boogie for the title cut, Lewis swooping up and down the keys here and on both a cover of her brother's 'Boogie-Woogie Country Girl' and 'It Came From The South', a song about the history of rock n roll ("It came from real hard work, sweat from the brow/From poor people just pushin' a plow/They made up a rhythm tryin' to pass the time") co-written by Al Anderson and featuring Scott Ligon, former and current guitarists with NRBQ, respectively.

Meanwhile, back in the southern country corner, Linda on lead, 'Till Death' has pealing pedal steel and to accompany its revenge of a slighted wife lyric while they introduce shuffling swing notes for a cover of Don Gibson's 'Who Cares' featuring a nifty solo from great Merle Haggard guitarist Redd Volkaert on a 1959 Gibson L5? There's more swing too the B3 organ backed duet on 'Your Red Wagon', a number recorded by the likes of Anita O'Day, Ella Fitzgerald and Count Basie. As you'd surmise, there's a strong jazzy flavour to the song and that's also evident on the lazy river rhythms of the brassy 'Memphis Never Falls from Style' that features contributions from Chicago jazz veterans, among them a solo from onetime Basie clarinettist Eric Schneider.

And, if there's jazz, there has to be blues and gospel too, the former in the slow smoky sway of the organ-backed Fulks' sung 'Foolmaker' featuring backing vocals by Chicago soul session veterans Joan Collaso and Yvonne Gage, and the latter, in its country variation, on the duetted 'On The Jericho Road', a Sunday meeting number Linda and Jerry Lee sang together as children.

It ends as it began on an autobiographical note 'Hardluck, Louisiana', a simple jazz trio ballad on which, in an emotion-heavy performance, Lewis recounts her childhood they may have been in an "old grey shack for five souls to share", but one that remains as "Heaven in my mind".

On recalling the birth of rock n roll, they sing how "It scared a lot of people when it first hit town/They didn't understand it, they were puttin' it down/But it's lasted up until today and we're still rockin' around." Indeed they are and in terrific style too.

I Just Lived A Country Song