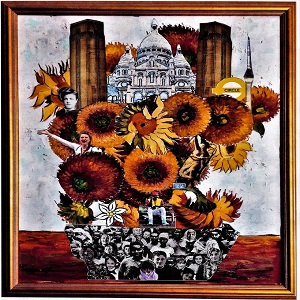 
Timely and emotionally charged, EUROTOPIA, Robb Johnson's latest release offers a personal journey around Europe. Not as expansive or as obviously ambitious as ORDINARY GIANTS his mammoth three disc historic concept album, this is still a highly personal set of sharp observations delivered in Johnson's dry and very english way. Songs like "Once Upon A Time On The Road To Eurotopia" are shot through with a sense of melancholia, vivid imagery and a sense of bitter disquiet. Imagine Billy Bragg, reflective after a few glasses of red wine channelling Edith Piaf and Jake Thackery, but still taking no prisoners.

"Charing Cross Station and Hungerford Bridge" is a charming love song, an unwrapping of a frozen moment, tied up with some memories. The lyrics are sharply observed, real life perfectly rendered like a snatched sketch. "Coincidents On The Circle Line" is a brilliant poetic piece, the jazz equivalent of talking blues. Robb's real London voice, like Jah Wobble's surreal "Rising Above Bedlam" breathes the landscape and spaces he describes Accompanied by sweet jazz guitar chords, with some soulful backing singers, like a street John Betjeman, Robb ponders The Circle Line and a long discarded Afghan coat.

This is a journey of revisiting old haunts and memories and often like "If The Night Runs Out Before The Money Runs Out" the present doesn't quite measure up to the past, as he shelters in a fading hotel, drinking and waiting for the light. "Tram Number 22" is late night jazz with Jenny Carr's glorious piano chiming while Robb vividly describes the dancers and faded grandeur in another love song. Jazzy too is "Edelweiss Pirates" with some Hot Club Reinhardt guitar and Linz Maesterosa's serenading clarinet as Johnson celebrates nonconformity and the 1930's bohemian anarchic alternative to the Hitler Youth. "My Last Night In Montmatre" looks darkly at current politics, moving effortlessly from big picture to small details in that way Johnson does so well. "Stalingrad" is a hallucinogenic mix of contemporary and historic, of surreal vignettes, like a big Al Stewart historic ballad rendered as a uneasy fever dream with Jenny Carr's insistent piano. "Welcome To The Museum" is an uncomfortable reflection, that doesn't so much spit in the face of our modern mess as kick its teeth in.

A barbed history lesson, a broader European take on James McMurtry's "Can't Make It Here". The anger is palpable, but it makes for captivating listening and an uncomfortable reminder. "The Work Is Never Done" is another sharp song an anthem for the faceless dispossessed who clean up beauty spots, unseen and not often considered. Sights like Sacre Couer are enternal, while minimum wage street cleaners and political extremists ebb and flow. Similarly timeless and eternal are back street bars and their musical entertainers perfectly described and celebrated in "Old Magicians"

ORDINARY GIANTS was full of english music, all aspects of 20th century popular music infact. EUROTOPIA, as ethereal as the title suggests, is full of European Cafe Jazz, bringing to life, vivid, passionate and very real songs of happy memories, melancholia and the rich sometimes contradictory history of now. All of this is filtered through the poetic, barbed word play of the institution that is Robb Johnson.

Coincidents on the Circle Line