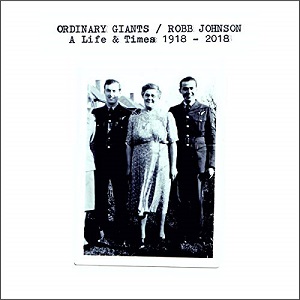 
For those who are only aware of the oft overtly, indeed at times acerbic, political work from Robb, perhaps Margaret Thatcher: My Part in Her Downfall or Tony Blair: My Part in His Downfall, a closer examination of his output will reveal a much broader spectrum of subject matter, be it the death of a biker friend on the sublime 21st Century Blues, the English Chanson of Metro or football, as on Friday Night In Brentford. And this merely scratches the surface of the catalogue of one of the most erudite and relevant singer-songwriters of our age.

1997 saw Robb complete a commission for the Passendale Peace Concert. With Gentle Men, his highly acclaimed collection telling the life-stories of his grandfathers, their families and the history of the First World War and its consequences, the balance between the factual and imaginative was achieved with great success. Personal experiences and memories were set against 'official' histories to create a timeless collection. A re-release, appropriately enough on Remembrance Day November 11th 2013, with additional material, only helped to cement the reputation of this body of work.

It should not come as a surprise then to learn that this template has been adapted for his latest release. Ordinary Giants is a exceptional piece of work covering 3CDs. Due for release in November, in the year that marks the 100th anniversary of the Armistice, together with the 70th birthday of the National Health Service, this epic song-suite draws on the life and times of his father Ron Johnson, and uses this as a fulcrum upon which to expand upon both family history together with wider societal and world events, notably the Second World War and the Welfare State.

Through this narrative, over 50 songs and spoken pieces chronicle events from 1918 to 2018, celebrating the ambitions, triumphs and dogged determination of the inconspicuous, but nevertheless remarkable, lives led by ordinary people through extraordinary times.

Robb's skill has been to seamlessly meld and weave the aforementioned socio-political events with these lives to produce a work which should stand beside written histories, such as Peter Clarke's Hope and Glory or the essays contained in 20th Century Britain edited by Francesca Carnevali, as a valuable testament and record of remarkable times.

In many ways Ordinary Giants runs as a radio drama, with narrators and commentators, individual voices for the main protagonists, together with fictional characters aiding and developing story-lines and a chorus (or four). Indeed the accompanying booklet boasts 'Cast in order of appearance' as if to aid the listener.

And what a cast it is that has been assembled to contribute either spoken word, vocals or instrumentation, surely a tribute to the high esteem in which Robb is held by his peers. Thus we find Roy Bailey, Boff Whalley, Tom Robinson, Sam Decie, Justin Sullivan, Fae Simon and Tracey Curtis alongside Miranda Sykes, Matthew Crampton, Phil 'Swill' Odgers, Alan Clayson, Frances O'Grady, Steve White and Mike & Reina Reinstein, and even a cameo appearance from Dennis Skinner. With musicians including Robb's longstanding regular rhythm section of John Forrester (bass) & Arvin Johnson (percussion), plus Saskia Tomkins, Rory McLeod, Clare Martin, Bobby Valentino, Jenny Carr and Linz Maesterosa, invidious though it is, the list is far too long to include in its entirety, so apologies to those missed here.

Given its nature and length, individual track review is impractical, thus the approach will be to give an overview of each disc, with a synopsis of its historical/social content together with selected song appraisal.

What had started as 'The Great War', becoming 'The War To End All Wars' and ending up as 'The First World War' came to an end in 1918, with the declared task of the Government of the time 'To make Britain a fit country for heroes to live in'. Robb's father, Ronald Walter Johnson, was born in the immediate aftermath of this, in 1922, son of Ernie, who had spent nearly all of the war on the Western Front, and Lilian Brice, who was 'in service'. Ron's older brother was also called Ernie.

Ron's sole memory of his Fulham childhood was the annual making of grottos around the house doors, recalled in The Mysteries of Fulham, alongside an early questioning of class distinction

'Why its 2 pence coloured, but only penny plain?'

Ron's family left Fulham and moved westwards along the Great West Road area and settled in Heston. His dad was a musician and bringing up Ernie, Ron and sisters Lily and Dorothy on musician's earnings was not easy. Slow Progress captures this well, with beautifully delivered vocals from Miranda Sykes. Ron's other abiding childhood memory, secretly sucking the milk out of their mum's rice pudding, further exemplifies the oft difficult times, and is related in the humorous The Hang Of The Door, sung by Matthew Crampton.

Economic disasters of the mid-20s, and the Wall Street Crash of 1929, together the spectre of the rise in Fascism, both at home with its attraction to the ruling classes, Mosely's Blackshirts and Cable Street, and abroad in both Germany, Spain and Italy, the 1936 Berlin Olympics with African-American Jesse Owens' victories raining on the Nazi-planned Aryan superiority party, together with Chamberlain's appeasement and 'Peace in our time' are all documented here.

Thus Here Comes Mr Ghandi, performed by Boff Whalley, (and Robb), reflects the affection and enthusiasm with which the Indian leader was greeted by northern workers when he came to explain why his country was boycotting British cotton, whilst the first appearance of the fictional Mr Utterswine, in Did You Go To Eton? represents the 1934 equivalent of a modern-day gammon. Holding Hands With Hitler pulls no punches, with Tom Robinson expressing Robb's vitriolic rebuke of the ruling class sycophancy towards Hitler with

Further family reminiscences follow, with Where You Can Go, and The Gentlemen Of The Chorus, which reference Ron's poor academic performance at school, his book of Van Gogh's paintings and his light operatic performances with elder brother Ernie, all of which have a significant place in the memory, whilst in Lou, the polemic returns, as the fictional character Gladys Brown, played by TUC General Secretary Francis O'Grady, in the first of several imagined pub conversations, espouses views such as

'There's millions go short of a shilling whilst some fill their boots with champagne' and
'They promised a land fit for heroes, once the war to end all wars had been won,
Now the hungry are marching from Jarrow, and it's clear something needs to be done'

The penultimate track sees Miranda Sykes delivering an absolutely breathtaking vocal performance with Cousin Kitty & Me, a perfect example of the stunning musical quality present on Ordinary Giants, before the final track, September's Song, contains moving lines from a 1945 poem written by Ron.

The coming of the Second World War sees Ron's memoir, 'A Navigator's Tale', beginning with Ernie warning against his serving as air crew. Again, politics and social issues feature in tandem with the personal life-story. We hear of Ron being sent to Canada to learn to fly, military operations in Bermuda, and even letting the Duke of Windsor 'play through' on the golf course, in the jolly A Very Nice Man In A Uniform. By contrast, November's Song sees Betty recalling the bombing of Coventry, in an achingly beautiful track, before the moving Winter Statistics, which once again utilises lines from Ron's poetry

We also, tellingly, hear that bomber command suffered a 44.4% death rate, a figure only exceeded by U boat crews of Germany.

Despite being bottom of the class in 1937, in Home By the Stars, a recounting of the night of 6th December, 1944 when J Johnnie, Ron's plane, was not only the sole aircraft to carry out its mission, but, in worsening weather conditions, was safely returned home through his skill in 'dead reckoning', navigating by charts and the stars. The pride that Robb has in father here is clear.

Christmas 1944 saw Ron & Betty decide that they were in love, but Ron's war came to an abrupt end in February 1945. Following a fighter attack on the plane, Ron successfully baled out and was listed as missing. The horrifying experience of crawling through the flames and the struggle with the escape hatch was, unsurprisingly, to haunt him for years after. These events are recounted through The Girl With The Golden Hair, the poignant J Johnnie, the hauntingly melancholic My Boy Won't Come Back and the thought-provoking The Parachute¸ which features magnificent vocals from Phil Odgers.

The end of the war brought optimism, with Atlee's government elected to enact the recommendations of the Beveridge Report, supposedly bringing an end to poverty with the creation of a Welfare State which included provision for social security, a national health service, free education, council housing and full employment. Ron and Betty were married in 1946, and Ron undertook the one-year training to become a teacher, events recounted in Atlee for PM For Me and the jaunty, up-beat In Nobby's Class.

We'll Be Lucky heralds the birth of their son, Robb, in 1955, and with songs referencing Aldermaston and CND marches, the building of the Berlin Wall and the ensuing Cold War, Ron's staunch advocacy of comprehensive education, Presidential assassination, the death of Churchill and a nod to 60s pop culture, the second CD sees the focus on Ron's memories drifting more to those of Robb himself, and is acknowledged as such by Robb as we move onto disc three.

Declining health, over the last fourteen years of his life, did not stop Ron from writing more poetry, and the emotional Too Soon Tomorrow, Ron's title, mainly comprises lines that he wrote. Ron passed away, in hospital, in 2013. His obvious life-long commitment to love, compassion, generosity, kindness, humanity and equality is juxtaposed with the ideology of a government opposed to social justice and social progress and intent on destroying the Welfare State.

The Clock Beyond Repair has Robb remembering his late father and their relationship. In his web-site notes, (see below), Robb states 'this really is an inadequate song'. I'm sorry Robb, but I beg to differ. It is a magnificent tribute that would bring tears to a marble statue. This track, together with the aforementioned Too Soon Tomorrow are two of the most sensitive and moving pieces that you could wish to hear.

The suite ends, however, on optimistic notes, firstly with The Valediction boldly asserting

'They thought that we were beaten
But we can put things back together
Again, in time
With our love for one another
& we did'

Mention must be made not only of the extensive notes which accompany the CDs, but also the cornucopia of additional material and background information, including more of Ron's poetry together with a link to a video of Rex Arnett the last surviving crew member of J Johnnie, which can be found here.

This is a positively monumental piece of work. Ordinary Giants, far from being oxymoronic, is a truly apposite description of lives of remarkable people, together with being an impressive documentation of some key socio-political events of the last one hundred years. The musicianship throughout is of the highest order, with outstanding performances of songs that will captivate, entrance, gladden, sadden and uplift in equal measure.

One of Robb's aims, with regard to this release, is stated thus - 'I hope these songs are a small contribution to the process of remembering, understanding and learning'. As far as this listener is concerned my message would be 'Mission Accomplished'.

Four cheers for the NHS indeed.