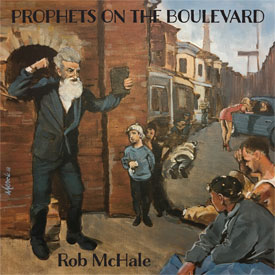 
A North Carolina singer-songwriter who conjures thoughts of Lightfoot, Cockburn and early Paxton, this is McHale's fourth album and, in addition to a cover of Willie Dixon's 'Little Red Rooster', continues to mine the social commentary seam of his previous releases, kicking off with a call for unity in 'Common Ground' inspired by a walk round the streets of Boston, the heady arrangement featuring cajon and djembe as well as dobro and fiddle.

A similar theme informs the simpler acoustic arrangement of 'Feels Like Home' and the breathily sung title track. On a political note, 'Blair Mountain' details the West Virginia miners' strike of 1921, one of the largest and most well-armed labour uprisings in United States history, and its brutal suppression, while 'Deep In The River' is a folk blues referencing the hanging of abolitionist John Brown that links slavery then and now. There's tender relationship numbers to be found in 'When The Sun Shines In', the loss and memory-themed 'Old Man On The Road', 'When I'm With You', 'One Star' and 'Keep Me Warm', while, as it suggests, the Appalachian-blues 'Mother Earth' has an environmentalist core. "I want to be like Woody Guthrie… make this world a better place" he sings on 'Woody's Shoes'. They're a good fit.

Prophets on the Boulevard