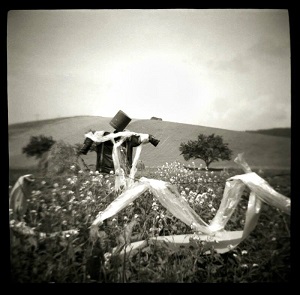 
Returning to the music scene in 2003 after a 14-year absence, Memphis singer-songwriter Jungklas has since released six albums. This is his seventh and continues an approach once described by Rolling Stone as like a 'bloodied bottleneck guitar and choked prayer'. Listening to the music here, you can see what they meant.

The album shares not only its title with the recent Gretchen Peters release, but, in terms of musical mood and lyrics also its southern gothic sensibilities. Indeed, the title track opener is a case in point, an unsettling song of heated desire couched in a spare, brooding, sax haunted melody as he sings of a woman whose "hair falls down into the valley in between her shoulder blades" and of how he sees her "take a piece of ice…and hold it in the hollow in between your breasts", and of voodoo poetry. And, in the final lines, of how " I lay naked underneath her I was dirty and she washed me clean. We were dripping sweat. She turned to me and whispered, you are beautiful, my darling, but this will end in flames. Take it in the heart, boy. Open up your jackknife. These pagans down in Mississippi, they will never understand." All to a repeated chilling chorus mantra of "Blackbirds. Mouths shut."

If death lurks in its verses, it's even more apparent in 'The Spiritual Beauty of Material Things', a song of life and dreams gone sour, the protagonist recalling working all hours to build a farm, conjuring Jim Morrison's talking blues, as he recalls how, he "lost my sister to Decauter Street, lost my mother to the flood of '22, lost my father to the riders", sitting at the kitchen table, drinking whisky "with a straight razor in my hand", now that his woman has left him too. The nihilism spills over into 'Nothing To Fade', as he sings about the death of love, hints of murder seeping through lines about how "she cannot hurt me anymore", taking her life before she has a chance to destroy his.

Twice he talks of the dying of the light, and darkness overwhelms the album in its despairing accounts of broken lives and loss. On the starkly titled slow march 'Gone' he sings how everything he loves falls away, turning Nina Simone's 'Feeling Good' on its head as, wracked with emotion he declares "This is not a new day This is not a new dawn . And you're not gone to a better place. You're just gone."

Built around an anthemic chorus, on 'Diggers' he sings in the voice of a freed slave, " a good man all things considered", who leaves picking cotton in the field to go to Alabama to "work to dam the Mississippi" for a dollar a day, only to find not some promised land but to "watch my wife watch me work on the river… watch my daughter watch her mother cry…watch my son watching his sister watching her mother watch her husband die inside." No wonder it ends with him wailing "I'm a digger, God help me, I've forgotten how to pray."

With knowing irony, the track leads straight into the unaccompanied spiritual 'Hymn' and from there to a note of hope and redemption with the achingly beautiful, sparse, cello-backed 'Low Hanging Fruit', as a tender touch and "small, simple acts of grace" prepare for a renaissance of the heart as "The ragged edges become smooth. The wound becomes a scar. The love we had becomes a wish. And the wish becomes a star." The search for redemption is there too on the chorus soaring 'Vitriol', almost every line opening with the word 'if' on a song of man on his knees trying to stand with the crutch of love. The album ends with 'Carry Me Home', beginning with the opening lines from the famous 19th century negro spiritual, 'Swing Low Sweet Chariot' before turning the sentiments upside down in embracing earthly pleasures and physical love now in the form of angels with too much black mascara, a man with a Telecaster behind some chicken wire. rather than the promise of a better hereafter.

As the song swells to a sort of Mickey Newbury 'American Trilogy', he sings

"When I call out to my angels in my hour of need saying Sister, I suffer, Brother, I bleed

I don't want no holy ghost to answer, I want flesh and blood And every face I see is a face I love. There ain't no heaven up there in the clouds above. Heaven's right here in the arms of the ones you love."

This remarkable album might not earn him a seat on the pew in the congregation, but it certainly warrants a prayer cushion in the church of your CD collection.