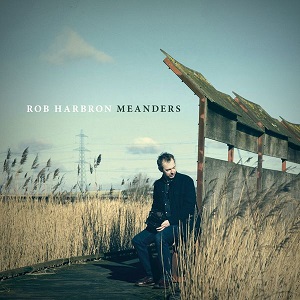 
For two decades now, Rob’s carved himself a career as one of the UK’s most distinctive and accomplished exponents of the English concertina. He’s thrived on immersion in a seemingly never-ending series of artistic collaborations – with solo performers (Emma Reid, Emily Portman) and as key member of groups such as The Full English, Dr. Faustus and The English Acoustic Collective, latterly the trio Leveret (with Andy Cutting and Sam Sweeney); and now Jon Boden’s Remnant Kings. But, obvious logistical considerations aside, it’s hard to believe that Rob has never released a purely solo record. Until now…

Meanders is that record, featuring just Rob and his 1930s Wheatstone Aeola concertina. It meanders purposefully through an astutely sequenced collection of tunes; for the most part these are fresh compositions of his own devising, highly evocative pieces that plainly and simply, and entirely charmingly, form what is described as “a series of postcards from the disparate places a touring musician might find themselves in during the day”. Rob’s equally engaging liner notes expound factors such as location and circumstance of composition in necessary detail, but however personal the backstory the listener feels properly included, and even more so by virtue of the involvement and intimacy of Rob’s playing. For close, concentrated listening inevitably produces the keenest result, enabling fullest appreciation of Rob’s artistry.

Tucked in among Rob’s own compositions are three tracks containing tunes of traditional origin – two comprise medleys of hornpipes (from the manuscript collections of William Irwin and John Orford respectively), the third presents Rob’s interpretation of a Herefordshire song.

Meanders is a compelling showcase for this individual and totally assured practitioner of the humble concertina.