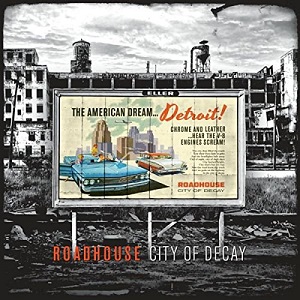 
Roadhouse, Roadhouse, Roadhouse where do I start. Well they have been plying their trade now for nigh on twenty years now here in the UK. They are the the brainchild of singer/songwriter/guitarist Gary Boner. Their style is rooted very much that gritty blues rock style.

"City Of Decay" is the band's thirteenth release and it is definitely not unlucky thirteen. The album is very much rooted in Americana and a very dark Americana at that. Dark themes and lyrics weave with gritty sometimes jangling guitar riffs, all over laid with Gary's deep gravelly vocals. Making it a very interesting journey through the dark underbelly of the Land Of The Free.

The album opens with This House Is On Fire a upbeat number which somehow reminds of Canadian Rockers Northern Pikes. A track full of tight guitar riffs that swirl around the lyrics with ease. You are then plunged into darker territories with the next track City Of Decay. A dark menacing track that conjures up images of that once great temple to the motor car the broken city of Detroit. You can just visualize the broken buildings and rusting hulks slowly returning to nature and the inhabitants trying to make the most of their lives amongst the dark underbelly of the American Dream.

A change of mood for the next song King Of The Streets.it starts out as a tight blues rock number held together with the clock beat of the drums. Then it spreads it wings with a Lynyrd Skynyrd style guitar solo. Up next is Blues Highway and gone are the gravelly vocals of Gary Boner in comes a voice that just drips in the blues Mandie G. The track has blues written right through the middle of it. Mandie's vocals conjures up images of long dessert highways that stretch for miles and smoke filled bars that are darkly lit and smell of whisky and smoke. The guitar riffs are like a open top Cadillac Eldorado screaming down the dusty highways.

We have Mandie G taking us forward with the next track Midnight Rain, a classic blues rock anthem that would not be out of place if Stevie Nicks was singing it. Up next is Night Of The Gun. A track that deals with hatred in all its forms. It is a hard edged track with guitar riffs that would not be out of place on a Gary Moore album. You also get the contrasting vocals of Gary with his gravelly voice and the smooth voice of Mandie G.

Mandie G carries on with the vocal duties for Queen Of The Mountain another track that is full of dark images and darker guitar riffs laid down with passion and power. Next is another version of Blues Highway Radio Edit This version is shorter and a little more up beat than the dark blues offering from earlier, it as the title suggests aimed at the American Rock Radio shows on the FM dial.

It is with a heavy heart that this journey through a brokern America comes to an end with Turn Your Face Into The Wind. Gary Boner returns to bid us farewell with anthemic road trip of a song. That screams of broken dreams, long desolate highways and the dark side of the American Dream.

So it is time to sum things up. If you like your rock and blues dark with a hard edge to it then this album is definitely for you. If you don't then give it a go like I and like me you might just fall in love with the album.