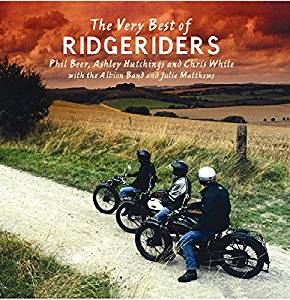 
Ridgeriders was a ground-breaking TV series directed by Mike Fuller, in which he explored the geography and history of southern Britain's Ridgeways, long-distance drove roads which are still legally traversable today (whether on foot or horseback, or in many cases even also by car or motorcycle). The music for the series was to deliberately reflect the Ridgeways' rich folk history, for which purpose Fuller approached Ashley Hutchings, who in turn assembled a trio consisting of himself, Chris While and Phil Beer to create original songs and perform them on the soundtrack.

The CD of the music from the series duly appeared in 1999, on which the trio were augmented by Joe Broughton, Neil Marshall, Julie Matthews and Ken Nicol. A further CD (In Concert) was released in 2001, which presented the core trio on tour in January of that year performing the majority of the earlier disc's songs plus some wonderful new songs and some instrumentals inspired by the landscape.

This new release is exactly what it claims to be - a compilation of recordings drawn from both of the earlier CDs, which intercuts in a seamless sequence tracks from both original sources preserving (more or less) the order of the soundtrack CD. It works well - but you won't need this CD if you've already got the two original CDs.

What this new compilation does, however, is remind us just how many brilliant songs came out of the original commission - how timeless their appeal is, much in the manner of traditional folk songs, indeed - and how well they stand up today. And of course it's impossible to underrate the excellent musicianship on display throughout.