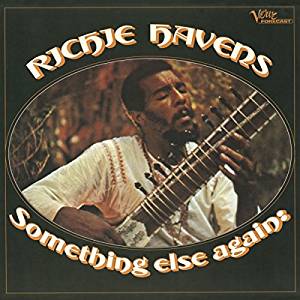 
The description "Legend" is attributed to many people these days, most of whom are not worthy of the description, so it is good to see that here we have an exception. Richie Havens can perfectly be described as a LEGEND.

Richie died in April 2013 at the age of 72 but his music, which has always crossed many divides, lives on as amply demonstrated by the re-issue of his second album, originally released in 1967. "Something Else Again" contains a mix of tracks comprising some self-penned songs and covers, including an unusual but excellent rendition of Dylan's "Maggie's Farm." "Inside Of Him" allows Richie's voice to use its rich and soulful quality.

"The Klan" is an emotive song about a time that most Americans would rather forget. A time of shame and disgrace but Richie's rendition of this song is delivered with real feeling and passion and explains the pain with exceptional clarity. "Sugarplums" in total contrast shows Richie in a softer more romantic mood with the music being in part credited to Tchaikovsky.

Richie was an accomplished musician who surrounded himself with similarly talented people. His voice has a strong but raw guttural sound to it at times but is never less than highly listenable. The backing on this album provides a near perfect window into the sounds of the late 60's.

When Richie died, his ashes were spread over the fields where the Woodstock Festival took place which seems perfectly fitting for this giant of music.