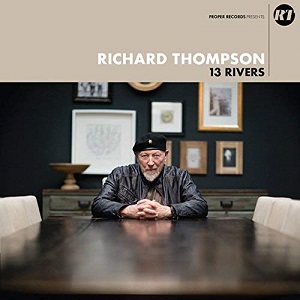 
The appearance of any new Richard Thompson record is an event, and something to celebrate. We can also celebrate in that, while each new release is shot-through-unmistakable RT, with common signatures and factors, its character will be often strikingly different from its companions and predecessors. Coming after three albums of Acoustic Classics and Acoustic Rarities (where fresh perspectives were gained on items culled from Richard's familiar and less familiar back-catalogue), 13 Rivers sees the return of the Electric Thompson, with Richard backed by his trusty regular latter-day trio of Michael Jerome (drums, percussion) and Taras Prodaniuk (bass) with guitarist Bobby Eichorn. It's also Richard's first self-produced album in over a decade, and his first album of entirely new material since 2015's impressive yet slowburning Still. Regarding the 13 Rivers of the album's title, these each signify a flowing current of emotion, a channel, a thoroughfare, which may be running fast or slow as the surrounding landscape and prevailing climate will dictate.

I don't know quite how to put this, but my initial impression was that despite the comparatively bare-bones presentation and stark electric band lineup, the songs themselves were sometimes struggling to break out of a dark, foreboding backdrop into the light of understanding. Despite their undoubted directness of expression there seems at first to be a strange kind of barrier for the listener; it's almost like too much of an onslaught, but an oblique one that's not easy to connect with. Having written that, I would admit straightaway that it seems like an unfair, and even dismissive broad-brush assessment, especially when the listener comes back for a second helping with another playthrough and the album's special qualities then soon begin to emerge.

The very title of the opening track, The Storm Won't Come, almost poses a literal challenge with its juddering backbeat and brooding, menacing, oppressively close feel (and overtone of despair) that never seems to resolve even in the stretched workout of the track's final couple of minutes. That is, until the cathartic subsequent release of tension with the storm-breaking, pounding, eccentric drum battery of track 2, The Rattle Within, a full-on slide down the dirty backstreet that burns angrily at both ends. The hammerhead charge of Her Love Was Meant For Me clothes an archetypal RT putdown number, with some great lines that are destined to earworm their way into your overnight consciousness before you know it. The quirky Bones Of Gilead launches its admonitory litany on a cheeky tick-tock B52s muted-plucked riff, while The Dog In You turns the pace down to a lazier bluesy drag and Trying is probably concealing much within its edgy, cautious funk rhythm. After which, the almost conventional rock-riff opening of Do All These Tears Belong To You? soon gets wrongfooted by the distinctly wayward melody of the verse and a decidedly eccentric closing solo that bookends and mirrors the verse by going all over the place, in between which is an accessibly harmonised chorus - go figure!…

By which juncture, the album's just past its halfway point, and the next track (My Rock, My Rope) may mark the disc's turn away from what Richard describes in the press release as "the weird stuff at the front of the record". The catchy masterclass-pop of You Can't Reach Me hides the desperation of its message, and closes with a neat solo that fades too soon leaving you wanting more. O Cinderella is a fun (if slyly putdown) little come-on of a fairytale with a jingling guitar part and a more produced tinkly waltzing setting to match/ Stylistically, No Matter, with its prominent mandolin riff and lighter texture, arguably harks back to Richard & Linda days albeit without quite evoking the bright lights, while the final track Shaking The Gates might be felt to make the greatest initial impression with its world-weary feel and leisurely tempo and interesting melody. It's assuredly a track to "grind your soul into submission", as Richard puts it (such tracks are, he says, deliberately placed at the back of the CD). This may be some degree of explanation for my slightly confused initial impressions, also some vindication for his method, but also doesn't necessarily make things easier for the listener.

As regards performance standards, these are as high as ever. RT's own exemplary and customarily brilliant solo work both effortlessly transcends and intelligently modifies that very concept by expanding and commenting on the lyrics while responding to and expanding the conventions and parameters of self-accompanied songwriting. All of which, I guess, is probably another way of saying that there's a surprise and a subtlety around every corner, every twist and turn of the meandering of the river's melody. There's considerable subtlety too in the way RT's fellow-musicians really feel to be embedded in the arrangements, their individual and collective toughness and muscularity matching or enhancing every gesture of Richard's own, and almost symbiotically whether in response or direct counterpoint. With subtlety, of course, comes restraint, and this quality is found in abundance, notwithstanding the often hell-for-leather quality to the inventiveness of the musicianship and the perhaps unexpectedly playful nature of some of the musical gestures. And indeed Richard's vocal work, which takes some chances with expectation with an increased sense of fun as well as a now consummate confidence in his own ability in that department.

Final assessment (well, for now!): IMHO 13 Rivers is one of those RT albums where on first playthroughs no obvious candidates for covering emerge - but time will tell, as indeed time will determine the album's stature and place in Richard's extensive output. For even after half a dozen playthroughs, 13 Rivers still hasn't revealed its full measure, but I strongly suspect it will before too long earn a place among his best work.