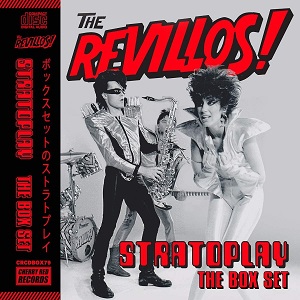 
No, this ain't a typo! The Revillos arose out of (= revived, geddit?) Scotland's finest punk-pop combo The Rezillos, which to all intents and purposes split at the end of 1978 after a bewilderingly intense couple of years peddling their unique 100mph trash aesthetic and anarchic art-schtick sensibility as a smiling antidote to the earnestly-bored punk persona of the day. The ever-so-slightly-different brand name saw the dynamic duo of Fay Fife and Eugene Reynolds continuing their fearless mission of melding kitsch '60s pop with new-wave energy, but now with what has been described as "exaggerated technicolour 360-degree hyper-reality" sporting a cast of what looked like comic-book heroes.

Though initially signing with Virgin label subsidiary Din Discs, the band had one of those unfortunate "should've made it but somehow didn't" trajectories that beggared belief both then and now, even considering the uninspiring climate of early-'80s UK pop. They followed their artistic vision with totally uncompromising clarity, and refused to kowtow to convention in any way, with a distinctively off-kilter look that was tagged "the corpse of an almost imaginary and enhanced 1960s pop culture, re-animated in a blast of crass day-glo brilliance, fast and furious, relentless and demented". A staggering, larger-than-life mash-up of inspirations from the B52s to Screaming Lord Sutch, Joe Meek to the Ramones, the Shangri-Las to the Velvets - and most points in between. Inscrutably cool, seriously tasty and totally irresistible.

What we have here on this magnificent, lavishly presented box-set is billed as the band's entire recorded output - although confusingly, the booklet's "selected discography" lists a handful of items that don't appear here, like Jack The Ripper and Sympathy For The Record Industry… hmm). But even so, I was surprised to find this set extending to six full CDs - since to my knowledge The Revillos had only released two studio albums, Rev Up! (for Dindisc) and Attack! (for obscure Scottish label Superville). Even accounting for adding the 20-years-on remix of the latter album plus a clutch of singles and a dozen vintage-1981 BBC Radio 1 session cuts, that amounts to just three discs.

The remaining playing-time - aside from some single cuts (including a riotously silly Japanese Scuba Scuba!) and a final 1996 radio session - is taken up by live gig recordings - first, there's the Live & On Fire In Japan set from comeback (after a decade off ) year 1994, of course, which was the first-ever Revillos set to include old Rezillos songs that the band had for so long resisted playing again. Then there's the London gig from the 1996 UK tour that made up the Totally Alive! Album, where the band went out on a fiery, heady high, never to appear onstage again. In which context, perhaps the crowning glory of this box-set is the final disc, which presents two live sets from 1981 - New York City (Feb) and Colchester, Essex (May).

The sheer energy, raw vision and utter pizazz (is that a word? it should be!) is astounding. As is the top-notch booklet, sleeve-notes and overall presentation of this set.