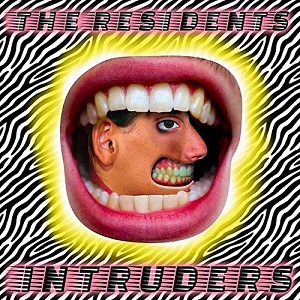 
The legendary, reclusive, enigmatic San Francisco band remain cloaked in anonymity for their latest studio offering, a set of songs which fosters the paranoia of the conspiracy theory with the central concept of “alternate beings stalking the corners of our consciousness”. Each song is a mini-movie in sound, telling the tale of a different, unique character who intrudes on one’s headspace – an uninvited guest in the darker recesses of the mind. The accompanying 32-page booklet provides a cinematic companion, an hallucinatorily illustrated counterpart for each individual, in the form of partially cryptical backstory and full lyrics. And as is de rigeur with the Residents, eccentric creativity is the order of the day, although compared to a good number of the band’s earlier releases the musical constructions herein might rank as almost conventional in their listenability quotient. Nevertheless, highly satisfying taken on their own terms too.

Each of the eleven portraits configures a smorgasbord of sometimes elliptical, often arcane, sometimes populist cultural references that emanate from the Twilight Zone and range audibly and subliminally from avant-garde experimentalism and the pop-psych of classic Pink Floyd to the deliberate weirdness of art-house, Beefheart, surf music, Johnny Cash-style country, imagery-rich movie or TV music, and even Pythonesque surrealism. Its juxtapositions are at once familiar and unsettling, characterised by a disturbing beauty that transcends easy interpretation or distillation.

With songs like Still Needy, the vocal mantras of the lyrics form earworms that burrow their insidious way into and out of your memories, whereas Carla Fabrizio’s distinctive guest vocals grace the album’s bookending tracks (Bobbie’s Burning Blues and the industrial-disco of Shadows). On the other hand, The Scarecrow is a multi-layered portrayal of a man so obsessed with James Brown, his recently-deceased defining musical inspiration, to the extent that one wonders who exactly is the intruder when he espies a scarecrow dressed exactly like his hero. Arguably the most sinister concept of all is the Doppelgänger whose spirit pervades the jittery clangour of Good Vibes. Elegantly ominous passages of poetical narration slip in and out too, not always making immediate sense.

It may be that Intruders, for all its revelatory concept strangeness, will come to be regarded as one of the Residents’ most accessible ventures – certainly in direct comparison to the curious train-wreck-informed Ghost Of Hope of a couple of years ago, or for that matter the “bonkers” mash-up of fan cover versions I Am A Resident released not all that long ago (but not submitted for review), but Intruders is also deceptive in that successive plays reveal more quickly more of the curious events, undercurrents and subtexts shifting along under the surface. In that, it’s destined to last.