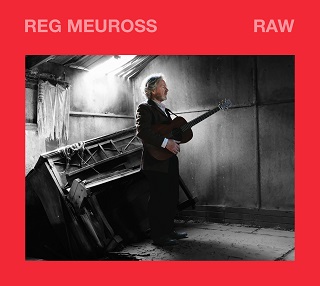 
Reg Meuross is a singer songwriter par excellence who I came across while searching for new talent for my erstwhile music festival, BAMfest. As part of the build-up to the festival I put on several gigs to raise awareness and promote live music.

Reg was one of the acts that I put on and I was not disappointed. He is a consummate singer songwriter who nails his colours to the mast and is prepared to ruffle a few feathers.

I particularly like the fact that one of his finest songs - England Green & Grey - was banned by the BBC. More fools the BBC, as this song deserves the widest audience possible.

Reg's latest offering, hard on the heels of his 12 Handkerchiefs project about a Hull trawler tragedy, is a package of sixteen songs recorded very plainly in Devon entitled Raw.

It is a cornucopia of delights, complete with a full lyric booklet, with songs covering a wide range of subjects from the apathy of what is going on around us in We Looked Away to the wonderful cowboy song Gene Vincent Jnr & Billy The Kid.

Arrangements are sparse but beautiful with the majority of songs performed on guitar and Appalachian dulcimer. There is an outing for the banjo on the sweet love song Stay and occasional harmonica, as on the powerful The Crossbones Graveyard.

There are several references to the sea, as in Broken and the upbeat The Eyes of Ida Lewis, which I'm sure will become a popular request during Reg's live shows.

There a several touching love songs such as From Now On, Moving On and If She's The One.

Songs with industrial heritage are also to the fore here with The Chainmakers and The Coalminers' Song.

There can't be many songwriters out there whose songs are of such a consistently high standard and deserve repeated listening. Now where did I put that lyric booklet?