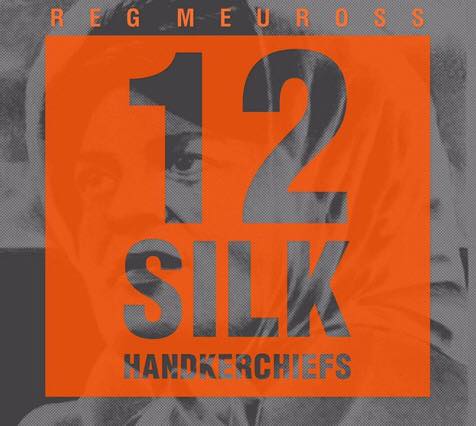 A little history, which will hopefully contextualise 12 Silk Handkerchiefs, the latest release from Reg Meuross.

By the 1960s, Hull was home to the world's largest deep-sea fishery. The trawlers based at St Andrew's Dock brought in 25% of Britain's total catch, but at great risk and cost to the trawler men and their families from the Hessle Road community. As Hull had developed into an almost exclusively distant water port, its trawlers having to journey a thousand miles to the dangerous Arctic waters around Iceland to reach the best hunting grounds, there was scant regard for the safety and well-being of the men. In what was contemporaneously regarded as the most dangerous job in Britain, some 6 000 Hull men were lost at sea.

Even by these standards, events of early 1968 shook this tight-knit and phlegmatic community to the core. In January, Hull's trawlers headed into the Arctic, but by early February it had become clear that three of them had sunk, firstly the St.Romanus, then the Kingston Peridot and finally the Ross Cleveland, the last two being hit, and obliterated, by the worst storm in living memory. In what was one of Britain's deadliest maritime disasters, 58 men lost their lives.

United in grief and charged by years of suffering and loss, the headscarfed women, led by fishwife Lillian Bilocca, 'Big Lil', rose up to protest against the dangerous working conditions, in a campaign to improve, indeed in many instances introduce, safety measures. One of the biggest and most successful civil action campaigns of the 20th Century saw 88 safety measures introduced immediately and a new fisherman's charter laid the groundwork for safety at sea for many years to come following the Holland-Martin Committe of Enquiry Report into Trawler Safety

These events are described in Dr Brian Lavery's 2015 book The Headscarf Revolutionaries: Lillian Bilocca and the Hull Triple-Trawler Disaster. It is this book that provided the inspiration for Reg Meuross to write the powerful song-cycle that is 12 Silk Handkerchiefs. Subsequently, it was following a collaboration which saw the weaving of the songs into a powerful multimedia show which was previewed 50 years on from the Triple Trawler Disaster in January of this year, at Hull's Kardomah 94 venue, that a decision to record the CD was made.

In addition to Reg, who provides voice, guitar and dulcimer, also appearing on the CD are the aforementioned Brian W Lavery, narrator, Hull folk-singer Sam Martyn voice, harmonium and flute, and union activist and stalwart of the Hull music scene Mick McGarry, voice. The CD comprises six songs, all written by Reg¸ each of which is preceded by a spoken introduction, together with a a closing poem, written by Brian and read by Mick.

The opening song, Wash Her Man Away, features Mick taking the lead vocal on a track in which reference is made to superstitions, including that of the trawler mens' wives not doing washing on the day the men left, lest they wash their man away. In this song, Reg's lyrics intelligently capture what author Alec Gill, in his book Folk Magic in Hull's Fishing Community (Hessle Road: Stories about Hull's Fishing Community and Arctic Trawling Heritage calls "the most superstitious community in the British Isles", and Mick's voice, together with Sam's harmony lines, do them full justice.

Sam takes the lead on I Am A Fish House Woman, Lillian Bilocca's harsh working conditions being described in sharply accurate lyrics which convey not only the fellowship of the female workers but also the on-going fight for the safety of their husbands, complete with a catchy chorus that one could imagine becoming a staple 'join in with' opportunity when performed live.

The following two tracks relate to elements of the disaster, with specific reference to one or two key protagonists.

John Barry Rogers is the poignant story of the eponymous 18 year-old deckhand, who served aboard the Ross Cleveland. On that fateful night, the trawler was hit by a wall of sea off Isafjord, (co-incidentally, two other vessels, the Notts. County and the Heiðrún, were also wrecked in Isafjordur that evening, the latter lost with all hands), and within seconds the boat was engulfed, with most of the crew inside the craft not dressed for the horrendous, freezing conditions outside. Barry, wearing only tee-shirt and underpants, along with 30 year-old bosun Walter Hewitt, who was wearing thick clothing that was neither wind nor water-proof, managed to escape the ship and were able to drag another crew-member, Harry Edom, who, in his waterproof gear, had been clearing ice from the deck, radar and mast, into their raft. With the wind at Force 12, and the temperature close to -40, Barry and Harry lost their lives due to exposure, whilst Harry drifting for another 12 hours with the bodies of his crewmates, was to be the only survivor of the Ross Cleveland. In The Man The Sea Gave Back, Harry's tale is the main focus. With Mick's captivating lead vocals on the former, together with Reg's gentle voice delivering his own potent lyrics in the manner for which he is renowned on the latter, these are songs filled with such emotion that it would be an empty, soul-less human being who would remain unmoved by them.

Sam returns to lead-vocal duty with Sleep You Safely as the story's narrative returns to Lily Bilocca. Following a television appearance, she was disowned by both many of her peers and many in the local community, including men for whom she had fought. This situation was exacerbated, when, on 21st February, 1968, newspaper reports, impervious to letting facts get in the way, (plus ça change...), accused Lily of calling for 'Love Strikes'. Divisions deepened, and Lily failed to get elected to the new association. In Coltman Street, as she was returning home, doubtless crest-fallen given the turn of events, she became aware of a young lad carrying a kitbag. In the conversation that ensued, it transpired that the galley boy was on his way to a trawler for his first voyage. Setting him on his way with words of encouragement and a huge hug, Brian Lavery's narration informs us, as does his book, that " It was the first time she had laughed for days" This encounter is the inspiration for this beautiful, heart-warming song.

Having received menacing messages, and even death threats from some of the trawler owners, Lily lost her job, was blacklisted and never worked in the fishing industry again. Lil's personal life continued to be a difficult one. Her first husband died in 1981, and following extended periods of ill-health, living in relative obscurity, she died of cancer, in August 1988, aged 59. Her last request, of her daughter Virginia, was to buy a dozen silk handkerchiefs from Hull market. The plea was dutifully obeyed. The next morning Lillian died. Lily had handed out the handkerchiefs to all those who had looked after her, cleaners, doctors and tea-ladies. The final song on the release, the immaculately-crafted Silk Handkerchiefs, which has Reg, once more, on lead vocals, is as moving a tribute as one can imagine, further confirming Reg Meuross as one of the most eloquent and compelling singer-songwriters ever.

This is a significant release which, unfortunately, comes too late to be included in many polls. It is, nevertheless, a release worthy of any 'Best Release of the Year' accolade, and should be on any must-have inventory.

Earlier this month, over 400 people packed Hull Minster, indeed extra seating had to be hastily provided for members of the Hessle Road fishing community who 'walked up' on the night, to witness a performance of the song-cycle which was presented as the core of a multi-media show. Standing ovations and tears were the order of the night, and there are plans for the show to tour in 2019. I think that it can be safely predicted that these events will be amongst the highlights of the year too.

My Name It Is John Barry Rogers