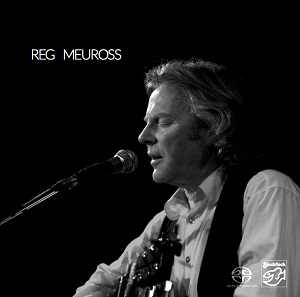 Reg Meuross
Album: Reg Meuross
Label: Stockfisch Records
Tracks: 12
Website: http://www.regmeuross.com/
.Reg Meuross has such a vast body of work, we’ve likely all pondered which of his songs would make it into a greatest hits album. Not all of us get the chance to pick our favourites, invite Reg to record new versions and arrangements. While this is resolutely not a greatest hits album, innovative producer Gunter Pauler did pretty much just that. After coming across a recording of England Green & England Grey, Pauler knew immediately that Reg was a perfect fit for Stockfisch Records. The result is a retrospective that takes some of his best loved classics, and gives them a whole new sound.

The eponymous album takes tracks from across his career, and reworks them with new arrangements and accompaniments. There are a lot of instruments on display – piano, flute, violoncello, Irish harp, fretless bass, and bowed psaltery to name but a few – but they perfectly serve the songs. The musical accompaniment to The Man In Edward Hopper’s Bar is especially worthy of mention, ramping up the atmosphere in the tale of a man on his own in a back street bar far from home.

The other tracks will be equally familiar to fans; from the hymnal beauty of England Green & England Grey, to the tender true stories of And Jesus Wept, For Sophie (This Beautiful Day), and The Band Played Sweet Marie. There is the heartache of Jealous, the longing of the magnificent The Shoreline And The Sea, and the heart breaking poignancy of Good With His Hands. This album is packed with the most wonderful songs.

Perhaps it could do at times with a higher tempo track (a Dragonfly, or a Faraway People) thrown in for a little more variation. All twelve songs are achingly beautiful, but lack the vitriol that Meuross does so well. However this is an essential album for fans – you may know the songs, but these versions will let you see them in a completely new way. It’s also the perfect starter album if you haven’t come across Reg Meuross’ music previously. If that is the case, then what are you waiting for? Go buy this album the second it comes out.