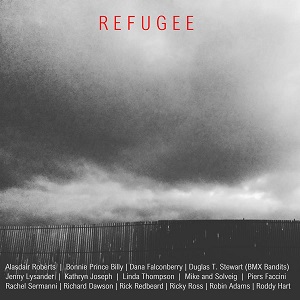 
No-one who has a heart could not failed to be moved by the plight of refugees. People, who through no fault of their own, find themselves and their families caught up in dangerous conflicts.

Our TV and media have covered the plight of Syrian refugees fleeing the war in their homeland in great detail.

Who could not be moved by the photograph in September 2015 of Syrian toddler Aylan Kurdi washed ashore on a Turkish beach?

Certainly not singer-songwriter Robin Adams, who decided to pull together an album of original and unreleased tracks from a wide range of artists. All proceeds will go to MOAS (Migrant Offshore Aid Station) - an organisation who have saved more than 13,000 lives since October 2013.

The result is this impressive collection of great music. Refugee features tracks from artists such as Linda Thompson, Alasdair Roberts and Ricky Ross but it also brings together emerging artists who have plenty to offer such as Jenny Lysander and Dana Falconberry.

The fifteen tracks are loosely linked to the overriding theme, with many commentating on the refugee's battle with sea.

But all the artists included here are to be applauded for their efforts. It was Adams song, The Devil's War and God's Blue Sea, which got the ball rolling when he released it as a charity single.

He says: "It occurred to me that organising a charity album might be the best way I could help. I got in touch with anyone I could think of whose music I admired and asked if they'd be interested in contributing. I just asked if they'd like to write a song or contribute something new which they felt might be fitting. The response was wonderful and it just grew from there."