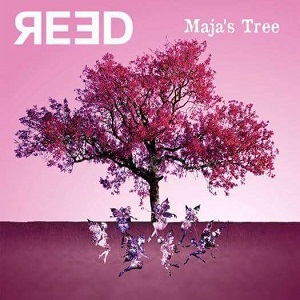 
Reed is a three-piece band of whom I can tell you very little apart from the fact that they're based in Royston, just on the Cambridge-side of the border with Hertfordshire. They're gaining something of a reputation locally, but are yet to receive much exposure outside of their home region. They boast a fairly unusual instrumental complement, consisting of flute (Sasha Mason), viola (Tom Rouse) and guitar (Alan Lane). That first put me a bit in mind of the sonata by Debussy which has a harp in place of the guitar… but the Reed sound is more informed by folk than classical models, although their music does display something of the poise of classical music.

The EP sets out their stall credibly, with two contrasted instrumental tracks at its centre: Inshca, a lilting waltz-time piece composed by Sasha which has something of a melancholic aura, and a lively rendition of a Breton dance. The bookends comprise one fine song (Shadow, written by Alan, on which Sasha takes the lead vocal role, features a lyrical viola solo), and one curiosity (Ted's Song, credited to the whole group, where a pleasantly drifting tune has at its centre a spoken meditation).

The music of Reed is distinctive, and makes more than sufficient of an impression to cause me to look forward to a sequel to this EP.