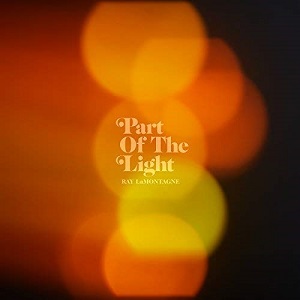 
The seventh studio album from Grammy winner Ray Lamontagne is something of a return to familiar ground. While 2016's Ouroboros was a little more psychedelic, Part Of The Light is more rooted in neo-folk, though with his usual rock twist. While in many ways it is business as usual for the New Englander, that's not to say there is anything over-familiar or samey about the new album. Each of his past albums have their own character, and this is no different.

To The Sea may seem a lightweight start to the album, but if you allow it to wash over you like the tide, it's a warming pleasurable experience that can't help but make you smile. Lyrically it's not aiming for profundity, but it certainly conjures the scene, and not every song has to be filled with deep and meaningful metaphor. Paper Man has a little more depth to it perhaps, with an almost Pink Floydian feel to it, but they work well as an opening pair to the record. The title track follows them, drifting along like the last remnants of a dream in the seconds before you wake, all hushed and meandering.

The highlight of the album is Such A Simple Thing, which as its title suggests is a song of beautiful simplicity, but delivered with an impressive strength. It builds nicely, with the musical accompaniment coming in gradually, and the imagery is striking. Goodbye Blue Sky gives us a delightful end to the record, with a strange love song which again has more than a hint of Pink Floyd to it. It's a rich, sumptuous, melodic treat.

In fact that neatly sums up the entire album - a rich, sumptuous, melodic treat. Yes there are a couple of lighter tracks on display, but there's something enjoyable in each of these songs that make this more than just a one listen wonder. There's something truly warming about Part Of The Light, which makes it the perfect accompaniment for a sunny day, or while cosying up under the blanket to keep the Winter at bay.

Such A Simple Thing