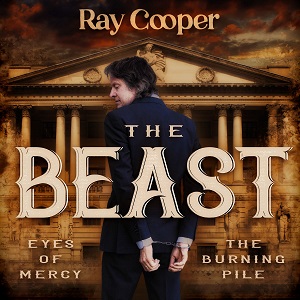 
The latest instalment of "folk with an edge" from Ray Cooper is a collection of three brand new tracks, available on digital (download and streaming) platforms only. It was recorded in a log cabin in Sweden, with Ray playing all the instruments himself (as is customary!) and with supporting vocals by Rowan Godel. The famed Chopper signatures are there in full force - hard-hitting and savvy lyrics and robust vocals, supported by solid textures imaginatively scored - but as with each subsequent new release the listener's transported into new territory.

Here this means title song The Beast, an extraordinarily powerful statement of the "plus ça change" phenomenon, a wakeup call that feels almost too late, such is the strong feeling of disillusion and helpless resignation in the part-spoken delivery. Opening with "Welcome to the Middle Ages", and developing the thesis that we're going "back to a world of pirates, religious wars, beheadings and slaves" - the past is back, but it never actually left. Also, the future is too much like the past, a future we didn't build to last, the past is a beast that never went away. This song is so intense that it's hard to resist a number of replays before moving on to the second track, Eyes Of Mercy, an altogether gentler piece musically speaking but not without a poignant and relevant message. Like the EP's title track, it carries deliberate overtones of contemporary events - this time the obvious reference is to Covid-19, for it tells the story of a patient in hospital who cannot speak but can observe the comings and goings of the nursing staff. The restlessness of the rippling guitar rhythm of the verse brings a measure of hope in the key shift to the chorus, the soothing cello part providing further potential reassurance and the promise of "progress towards the light".

The final track, Burning Pile, was inspired by the witch trials which took place in Mora, Sweden in 1669. In essence, it's a mandolin tune set to a pounding drumbeat, embellished with further instrumentation and a vocal chorus into something approaching a movie theme.

It's not clear whether this EP is to be regarded as a calling-card for Ray's next full-length album (due next January) or as a totally separate project. But either way, it's a very strong new addition to Ray's recorded output, and yes, "it (still) doesn't sound like anybody else"!