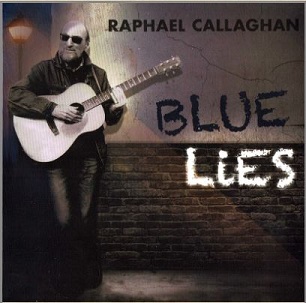 
It was Mark Twain who popularised the phrase "There are three kinds of lies: lies, damned lies and statistics".

What are "Blue Lies" ? According to Raphael they are stories about shadowy figures found on the B-roads of the blues - the unfaithful lover, the accident-prone, the restless rambler, the disconsolate and the deceiver.

Raphael has been playing his own brand of acoustic blues for well over half a century and is naturally steeped in the lore of the blues. He has played with such giants of the genre as Bonnie Raitt, Alexis Korner, Jo Ann Kelly, Eric Bibb , Jessie Mae Hemphill and the wonderful Danny Thompson.

I have seen Raphael perform countless times from the mid-1970's right up to last summer's Folk on the Farm Festival on the beautiful Isle of Anglesey and I have always come away from his shows feeling uplifted by his dexterity and flair for melody.

"Blue Lies" is Raphael's follow-up to his highly successful 2016 album "Said and Done", from which Paul Jones played three tracks on his BBC Radio 2 blues show.

"Blue Lies" is a true solo album with Raphael writing nine of the eleven tracks and playing all of the instruments - acoustic guitar, bass and harmonica in his own distinctive style.

Several of the songs are , according to Raphael "as near autobiographical as I care to admit" , including "Blues For Mr Bean" ["there's always been a bit of Mr Bean in me"] and "Rambling Boy Blues" [ " I'm a rambling boy , ramble till the day I die"].

Also clearly autobiographical is "Born In Liverpool" in which Raphael muses on how he could have jumped on various musical bandwagons but remained true to himself and his particular style of music - "I'll just sing the way I want to , you'll just have to let me be". This is clearly a mantra that has served Raphael well over the years.

Raphael's live shows always feature a gospel number or two and on this new album we have the superb "Time To Leave" in which Raphael muses on mortality. Raphael was inspired to write the song in a single sitting on a Sunday morning so "maybe that qualifies it as a gospel piece".

There are two bonus tracks , both of which are "tender love songs" ,namely "My Old Denim" and "Cake And A Candle" [ a blues waltz].

Overall , this is a highly satisfying album from Raphael Callaghan. The songwriting is excellent and the playing is immaculate , as you would expect from such a seasoned performer. As Raphael sings in "Born In Liverpool" , "What you hear is what you get".

I Don't Take Sugar No More