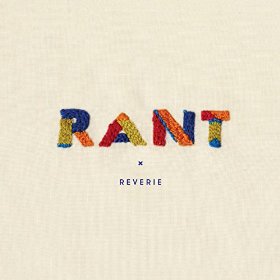 
Rant (Scots - 1. Noun - an energetic dance or its tune; 2. Verb - to make merry, to frolic). There couldn't really be a better name for this exceptional fiddle quartet. Every track on their second studio offering, Reverie, oozes joy and many of the tracks are likely to get your foot tapping to the infectious driving rhythm. Having achieved critical acclaim with their debut album back in 2013, Rant have made a name for themselves as a highly accomplished and innovative group, wowing audiences and adding their unique sound to the likes of Julie Fowlis' recent album Gach Sgeul.

The album is a pleasing mix of original and traditional tunes, plus a few interesting surprises. The opening track, JT's is an original tune by Bethany Reid. Another Bethany Reid original is Dad's 60th, a contender for my favourite track on the album. The melody is exuberant and bounces along over the light chordal accompaniment. One of the shortest tracks on the album, Willie Cumming's Rant is lovely clean fiddle playing at its best, starting in unison, jumping the octave to add contrast and seque beautifully into a syncopated accompaniment that develops in a thicker chordal texture with a running bass line. The simple arrangement in incredibly effective. It's great to hear some James Scott's Skinner on the album, both the air Geanie's Lament and the more sprightly Fire Way/Frank's.

The two songs on the album are collaborations with possibly two of the greatest Scottish singers alive today. The first, Mary's Dream, features the vocals of Ewan McLennan and is a traditional tune with words by John Lowe of Galloway. The quartet accompaniment is incredibly atmospheric, with the shimmering tremolo in verse two adding a sense of foreboding to enhance the storm in the lyrics. The harmonies between the violins are close, adding an intimate quality, especially in the instrumental ending which is sweet and poignant. The second is a continuation of the quartets collaboration with Julie Fowlis and is a cracking Gaelic strathspey.

The surprising track is Fyrir Mig, Jesú, Poldir Pú, a string arrangement of a hymn that Bethany heard on a Schola Cantorum album. The stillness and poise is haunting and you can imagine the music floating between the columns of a great Cathedral by candlelight. It brings the album to a calm and contemplative end, a refreshing change from the fireworks that bands often choose to end albums with.

Like a good single malt, their time together is only improving Rant's overall sound as an ensemble of incredibly talented musicians. This album is a pleasure to listen to engaging and varied with a diverse range of material to suit all tastes. If you want to catch them live South of the border, you can hear them in York in early October.