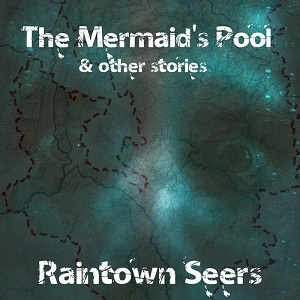 
There's an old phrase amongst comedians, "It's the way I tell 'em", it explains why a joke delivered by one person falls flat and has you rolling in the aisles when told by someone else. In many way's it's the same with narrative songs. "The Mermaid's Pool & Other Stories", the latest cut from Raintown Seers makes an interesting case.

Most of the songs on the album are penned from within the band, mainly Neil Fisher and are a pretty fine collection, but there are also a few covers on the album and that allows me to apply a litmus test, how does a band manage other people's songs? The answer not bad, close enough to the original to pay homage, different enough to place their own mark.

Being brutally honest, "The Mermaid's Pool & Other Stories" won't be a regular visitor to my cd player, but it will get there, I enjoyed it, it's hard to fault it, but it feels like something you dip into rather than go for the full spa treatment and that's not necessarily a bad thing.