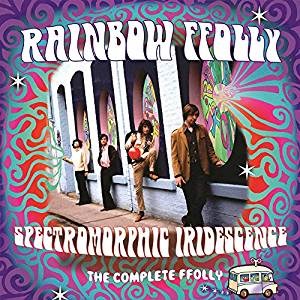 
This lavishly-packaged three-disc box presents everything known to have been recorded by the obscure, extravagantly titled group whose key album Sallies Fforth, the stuff of legend and a something of a cherished collector’s item over the years, came complete with a memorably frippery-trippy technicolour cartoon sleeve that, being lamentably devoid of band personnel information, only added to the mystique surrounding the band.

Although it tends to be bracketed with the welter of ingenious, ambitiously-produced albums released by “psychedelic” bands on the various EMI labels between 1966 and 1969, the album Sallies Fforth, released on Parlophone in May 1968, is something of an exception in that it’s actually a collection of homemade demo recordings rather than a polished studio artefact. Rainbow Ffolly was a quartet of eccentric ex-art-students from High Wycombe (Stewart Osborn, John and Richard Dunsterville and Roger Newell), who, in the words of this set’s wondrous booklet essay, “viewed psychedelia through a mocking, slightly surrealist art-school prism rather than as unblinking zealots”, and thus imparted a different, less pretentious kind of creativity to their music-making. The story goes that these recordings – in essence, originally made for the local Jackson Recording Studio under the band name of Force Four – were sold to EMI as a done-deal entity, without the band’s knowledge.

The subsequent change of band name turned out to be both inevitable and highly appropriate, reflecting both the band’s audible sense of fun and the flippantly extravagant (sometimes mildly embarrassing) linguistic predilections of the era. But there’s nothing embarrassing or gauche about this collection of songs, for all that they’re linked together by strange jingles and sound effects to form a vogue-ish “sound package” – and for all that they were almost all “written to order” at the studio owners’ request to produce an album’s worth of diverse songs. Audible influences from the era’s psych practitioners are legion; they’re unashamedly absorbed, chewed on and spat out. Crafty, knowing references to contemporary stylings abound, eg. “Smiley” Beach Boys touches on Sun And Sand; a cheeky namecheck for the Small Faces’ hit Itchycoo Park on the jaunty music-hall/vaudeville number I’m So Happy; a faux-courtly-renaissance aura on Montgolfier ’67; fuzz-drenched heavy guitar on Hey You; Wurzel-some rustic silliness on They’m; the tongue-in-cheek Labour Exchange; the Byrdsy sunshine pop of Sighing Game.

The set contains both mono and stereo versions of the Sallies Fforth album, plus a slightly revised incarnation of the hitherto-vinyl-only 1996 reunion release Ffollow Up. Further topping-up brings us a handsome collection of bonus tracks. Those gracing Disc One chart the band’s progression from beat-combo on early Force Four demo for Come On Go and Pretty Things-inspired Sun Sing, then there’s a single mix of Drive My Car (not the Beatles song!), its B-side Go Girl, and a rather over-the-top cover of The White Album’s Bungalow Bill recorded in late-1968 just a few months before the band folded. Disc two’s bonus tracks are even more wildly wayward; there’s a bunch of fiery radio session tracks from December 1968, and a clutch of previously unreleased home demos, mostly covers, which range from a blistering Sunshine Of Your Love, a nicely jangly Bells Of Rhymney and a pair of solid ’60s-style guitar instrumentals (Bonita and Sabrosa), to a truly awful Lucy In The Sky With Diamonds (done with horrendous Pinky & Perky-style vocals) – all punctuated by 13 hospital radio jingles of varying merit, humour and interest.

There’s a playfulness, a glorious sense of irreverence even, in these recordings, that’s more comparable to contemporaneous pranksters and pastichers than the heavy psych brigade – yet their idiosyncracies bear serious scrutiny under their own terms.

Sure, there are moments of slightly amateurish back-bedroom tomfoolery, but shining through it all there’s plenty of capable writing, better-than-decent harmony singing, a wealth of versatility in the musicianship and some very interesting creative ideas.

Anyone who’s not yet sampled the special Rainbow Ffolly brand of cartoon “wind-up psychedelia” will have a real treat in store, a veritable feast awaiting them on purchase of this magnificent set.