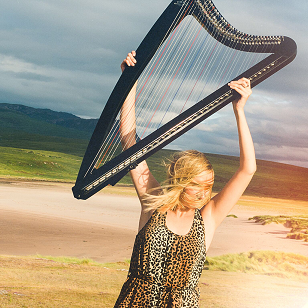 
When one of your favourite musicians is the celebrated Breton harpist Alan Stivell, it comes as an absolute delight to be given the opportunity to review the latest release from Rachel Newton.

In addition to being awarded Instrumentalist of the Year at the Scots Trad Music Awards in December 2016 and then winning the prestigious Musician of the Year at the 2017 BBC Radio 2 Folk Awards, Rachel's third solo album Here's My Heart Come Take It, (released in 2016), was short-listed as one of Scotland's top 10 outstanding albums in the Scottish Album of the Year (SAY) Award 2017.

Never one to rest on her laurels, and unafraid to chart new waters, West, her fourth solo release, after 2012's The Shadow Side, Changeling (2014) and the aforementioned HCMHTI, sees Rachel eschewing the former, fuller, sounds of a full supporting band of guest musicians to produce a completely solo album featuring simply her voice with acoustic and electro harps. And what a magnificent album it is.

Arranged and recorded over one week in July 2018 in her grandparents' house in Achnahaird, Wester Ross the album seems to be an intensely personal one, even the title alludes to her great-grandfather's nickname, West, given because he lived in a house on the west side of Achnahaird, and features some of Rachel's favourite songs.

Rachel's ability to compose a fine tune is much in evidence throughout on this release, as is exemplified on the next offering, Maid of Neidpath. With words by Walter Scott, this haunting tale tells the story of Jean Douglas, daughter of the Earl of March, who was forbidden to marry a young man of the Borders, who was considered below her station. She withered and waned while her lover was sent away, and when he returned she was so wasted that he did not recognise her, causing her to die of a broken heart. Her melody captures the melancholic nature of the tale perfectly.

'The Castle arch, whose hollow tone
Returns each whisper spoken,
Could scarcely catch the feeble moan
Which told her heart was broken.'

The geographical location for the recording, with its spectacular views, has also spawned inspiration for four short, improvised instrumental pieces, named after local mountains, which thread their way through the album. Suilvan, Stac Pollaidh, Beinn an Eoin and Ben Mor Coigach may only be brief excursions here, but surely they warrant a further, extended outing, possibly as a suite?

Rachel does not, however, limit herself solely to musical influences from these isles, for three tracks she willingly crosses the Atlantic. The first of these, Once I Had A True Love, based on the version by Peggy Seeger, with its sad tale of lost love, is beautifully delivered, with exceptional harp and vocals

'One night in sweet slumber I dreamed I did see
My own dearest true love come smiling by me,
But when I awoken I found it not so,
My eyes like fountains with tears overflow' (lyrics edited)

This Transatlantic sojourn is, for the moment however, a brief one as we return to the Inner Hebrides, by way of John Maclean of Tiree's Hi Horo's na Horo Eile. Gorgeous vocals and divine harp playing once again grace this contemplative, but ultimately hopeful, song, and whilst I do not understand Gàidhlig, I believe the gist of part of the song to be

The sixth track on the collection is a stunner. Skye Air, is a tune from the Patrick MacDonald Collection first published in 1784, where it was given no title, but simply annotated 'Skye Air', apparently like many pieces in that collection, which helps to explain why there exist several different tunes called 'Skye Air' or 'Skye Dance'. The version on offer here is an achingly beautiful instrumental that lingers long in the memory.

Willie Mathieson, the famous north-eastern ploughman, song collector and singer learnt the song For Love from Annie Massie, a maid at East Toddlehills, when he was about fifteen, and Rachel's interpretation is based on his version from the School of Scottish Studies Collection. Although the song's subject matter is a sad lament, (or maybe a cautionary tale concerning the vagaries of being enticed by yellow, curly locks), here the tempo is a slightly more jaunty one, with some delightfully intricate harp-string picking.

A return Stateside sees Rachel perform A Token, another doleful tale based on a version sung by Mr Frank Poole, from Fayetteville Arkansas and collected from the quite wonderful Max Hunter Folk Song Collection, an archive of almost 1600 Ozark Mountain folk songs, recorded between 1956 and 1976. (The 1958, scratchy version which provided the inspiration is also well worth a listen)

'Take this ring from off my finger
Where he placed it long ago
Give it to him with a blessing
Which in dying I be-stow
Tell him, it is a token, Mother
Of forgiveness and of peace
Tell him, hush his voice I hear it
Will it's watching never cease.'

Rachel Newton's West is a sublime album of the highest musical quality, and can be highly recommended.