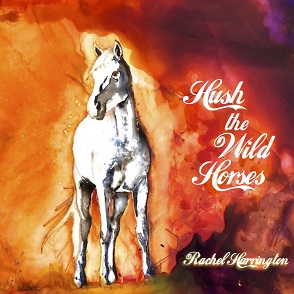 
This is Oregon raised Rachel Harrington's first album release for over 8 years, although it is her fifth in her career to date. The intervening years have been taken up with falling in love, putting down roots and getting dogs and horses. Eight years of reflection and some songwriting, the results of which can be heard on this new offering, "Hush The Wild Horses!" Rachel describes this period as Homesteading.

Rachel's music is described as Americana or Acoustic Country although much of her songs lend themselves to the genre of modern folk. Just listen to some of the acoustic guitar work, especially on "I Meant To Go To Memphis" and you will understand that comment! It also happens to be my favourite track.

The title track of the album comes from Rachel's love of horses and her passion for rescuing these wonderful animals from slaughterhouses to be sold for food. The themes of the songs throughout drift from war, to love and to addiction. Whilst perhaps not to be viewed as the best of bedfellows, the themes work well with Rachel's rather, at times, sad, soulful and melancholy voice.

To understand what lays behind the songs on this album, it is perhaps best to use the words from her website. "The title track is about her finding her forever love. Child of God, inspired by field-holler gospel-blues, revisits a #MeToo moment when Rachel was molested in grade school. The fingerpicking of I Meant To Go To Memphis reviews her travels and travails with addiction. The Barn is about her mother's high school boyfriend who died while serving his country. Drop Zone's rockabilly-driven lyrics are taken from Army training cadences Rachel learned from her future husband. Mekong Delta is about the suicide death of her uncle after serving in Vietnam. Save Yourself walks a mile in the shoes of Rachel's homeless brother. And Susanna (a co-write with her son) is Harrington's tender tribute to her songwriting hero, Guy Clark."

Overall, this is a delightful album produced by a genuine singer songwriter of our times with some great backing and superbly balanced vocals. Rachel wears her heart on her sleeve and is a clever enough songwriter to be able to get her messages and emotions over through her music.

Rachel will be on tour in the UK during July performing on 18 dates, and returning for a shorter tour in October.