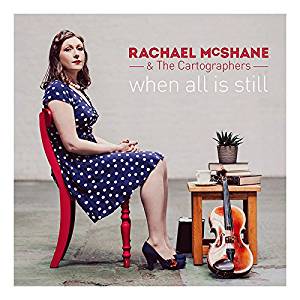 Rachael McShane & The Cartographers
Album: When All Is Still
Label: Topic
Tracks: 11
Website: http://www.rachaelmcshane.co.uk
.Fresh from her resounding success playing the role of Susannah Holmes with The Transports, Rachael McShane, lest it be forgotten, an original member of Bellowhead, releases When All Is Still, her first solo album since 2009's No Man's Fool.

In addition to Rachael contributing vocals, fiddle and viola, the album sees her bringing together a new band, The Cartographers, which features Matthew Ord (Assembly Lane), electric and acoustic guitars vocals, and Julian Sutton (Kathryn Tickell Band, Sting), melodeon. This release, recorded in rural Northumberland late 2017/early 2018, contains inventive and innovative revisions of traditional songs in a collection that will almost certainly be destined to feature in 'Best of Year' nominations.

If one adheres to the assertion from the BBC that 'folk music is largely about three things: sex, death and politics', then this album will not disappoint, running the gamut, as it does, across these subjects, and more, over its 11 tracks in which various facets of humanity, or lack of, are explored against a backdrop of effervescent singing and playing.

From the opening notes of The Molecatcher, (sly tale of biter bit), the quality of Rachael's voice shines through, and the incorporation of Julian's Simpson Street Waltz is a fine addition to her own melody and chorus.

Lady Isabel, (serial killer tale) is a take on The Outlandish Knight, but don't expect the lavish arrangement that appears on the aforementioned Bellowhead's Burlesque, here the venerable melody is the focus in a version that owes much to Alan Lomax.

Cropper Lads, (rebellion), recorded in 2002 by Maddy Prior & The Girls, and more recently in 2009 by Mawkin Causley, is given an outing here too. Croppers, although relatively few in number, played a central part in the activities of the machine-breaking Luddites in Yorkshire, in particular in and around Huddersfield, and once more, the addition of Rachael's Full Belly tune gives breadth to the track.

Lads are also to the fore in the next track, with Ploughman Lads, (tale of love). A favourite song among ploughmen and bothy workers, and a staple of the Scots folk revival of the early 1970s, this Anglicised version of Plooman Laddies shows Rachael's exquisite voice off to perfection.

Two sets of tunes appear on the CD. The first pair, Waltzing at Giggleswick, a Rachael composition, (of which I'm sure a certain Mike Harding would heartily approve), is followed by The Ginger Cat Monster, written by Julian and named by his daughter. The second, Road to Tarset/Lake of Swans, are both Sutton tunes and are intended as a musical visitors' guide to some of his favourite places in Northumberland. What all four clearly show is the quality of both the writing and musical prowess within the group; they stand on a par with anything else being written within the genre today.

Two Sisters, (sibling rivalry), will be well-known to many, perhaps as The Bows Of London or The Wind And the Rain, as The Twa Sisters is a popular ballad found in several song traditions the world over. In many versions of the song the remains of the body of the drowned sister are used to make a harp or fiddle which then takes on a life of its own and sings out the details of the girl's death, unmasking the murderer. Look out here, however, for an ending more akin to something that could, hypothetically, be found in an adult version of Roald Dahl's Revolting Rhymes, in what is a cracking interpretation.

Adultery and cuckolding find their place in Barley and Rye, whilst Sheath and Knife provides an outlet for incest. Taught the song many years ago by Maggie Boyle, Rachael's melancholic delivery here exemplifies how powerfully emotive the human voice can be. Given this moving rendition, it would be good to hear her undertake Lucy Wan at some stage.

Sylvie, (female highwaymen tale), a song also known as Cecilia, Sovay or The Female Highwayman, was one of the first songs put together by the band, telling the tale of how, in order to test the bravery and loyalty of her lover, Sylvie disguises herself as a highwayman.

Whilst other guests performing on the album include Ian Stephenson, double bass, piano, Tom Kimber, mandolin, Jonathan Proud, electric bass,Martin Douglas, percussion and Bronwen Davies-Jones vocals, on the final track, Green Broom, which celebrates the joys of staying in bed until noon, Paul Sartin, oboe, Andy Mellon, trumpet, Justin Thurgur , trombone, and Ed Neuhauser, tuba, formerly with Bellowhead, make an appearance, helping to round off the album in style.

When All Is Still is a delightful album, with both singing and musicianship of the highest order. This neoteric approach to trad folk is at once refreshing and captivating and deserves investigation.