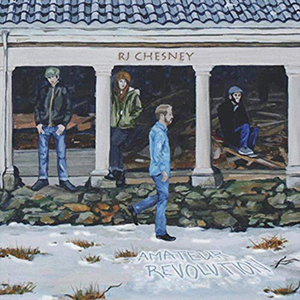 
Over the past few years the American Folk-Roots singer/songwriter RJ Chesney has been establishing something of a reputation for himself as a performer who will appeal to 'folks that like eclectic music that borrows from traditional, yet switches it up'.

Amateur Revolution is RJ's third release following on from 2010's Prayers of a Wayward Son and 2015's Angels Falling, although the genesis of this current album is somewhat unusual. In September 2015 long time collaborator and produced Jason Hiller called Chesney with a proposition. Norwegian producer HP Gunderson and film maker Tore Rygh were in Los Angeles making a documentary about local singer-songwriters and wanted to feature a Chesney performance. After Gunderson went back to Norway he contacted Chesney suggesting they collaborate on some songs and over the next 9 months Chesney sent him a bunch of lyrics which Gunderson would return with melodies, and then Chesney would work out the songs as a performer. The result is this 12 song album, produced by Hiller and Gunderson and recorded in both Los Angeles and Norway. The record also features a similarly eclectic bunch of musicians from USA and Norway, unfortunately far too numerous to mention by name, adding acoustic and electric guitars, pedal steel, bass, drums, piano, organ accordion, violin, horns and jaw harp.

Opener 'Splendors Of This Earth' rocks in on a Johnny Cash type strum and pedal steel before Chesney's vocal, which is perfect for this music with its country twang and shades of Willy Nelson and Ry Cooder in the delivery. All in all, great introduction to the album.

'Pull Down The Moon' has another strong rhythm guitar part and boasts fine ensemble playing from the band as it rattles through, while follower 'A Place Just For Me' is a slower, more measured affair and showcases a great vocal and atmospheric country arrangement, but it's easy to imagine this song given the Stax soul treatment.

Title track 'Amateur Revolution' is a guitar driven number with an ear worm chorus, 'Do You Remember Me?' is another courtly affair which reminds me a little of Dylan's 'Lay Lady Lay', 'Proud Of You Child' is ballad territory and 'No Reason Left To Stay' continues this mid album reflection in lovely fashion.

Other stand out tracks for me are the wryly dark nod to the inevitability of our demise in 'Death, An Old Widow's Peak', the simple sentiments of the heartfelt 'Never Give Up On Love' which features some particularly sweet harmony vocals, and the 'call to arms' of album closer 'Rise Up And Sing'.

Good album this. To my ears it is less Folk or Americana and more modern country in sound, particularly with the pedal steel to the fore on most tracks, but there is also a lot of other textures in there that make it hard to pigeon hole. Country music is a very broad church these days, particularly when you think of acts like Chris Stapleton and Sturgill Simpson, so it's great to get others coming along to push the boundaries further.

A Place Just For Me