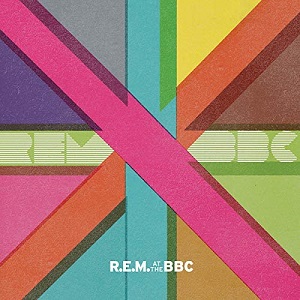 
Now, here's a big chunk of REM to bite off… eight (count 'em!) CDs and a DVD of BBC appearances including sessions, live sets and specials spanning some 24 years in which the band grew from fresh-faced twenty-something US contenders to The Smiths' crown, into a stadium-filling behemoth that rivalled the likes of U2 and Oasis.

The first two discs catalogue REM's various studio outings at the Beeb, from a six-song set recorded for Into the Night in 1991 (Radio Song is a slightly awkward stripped back funk thing but the band sound like they're having real fun on Love Is All Around) to the pair of tracks they made for Live Lounge in 2008 - a raw and unrefined take on their Supernatural Superserious 45 and a loose-limbed but reverential cover of Editors' highlight Munich. The real stand out though is a searing blast of Orange Crush culled from a 2003 Mark & Lard show, serving as an early reminder that for all their deftness of touch in an acoustic setting REM could also pin back the senses when they let rip.

Some of this has been available unofficially before, but the properly mastered complete John Peel session from 1998 is a treat - Losing My Religion (one of several tracks to feature throughout) has a particular bite and they give new vent to Murmur highlight Perfect Circle. It's a slightly odd set in that Peel was not known as much of a fan, but they dutifully showcase the then current Up album with tracks like Daysleeper, Lotus, Parakeet and a gently stunning At My Most Beautiful.

The oldest recordings here are from their 21 November 1984 show at Nottingham Rock City. It's not quite a full set but it captures the young and rootsy REM on the road in support of second album Reckoning, still some way from the highly focussed stage craftsmen they were to become, but nonetheless they can be heard flexing their growing muscles on early days high points like Radio Free Europe, Pretty Persuasion and Talk About the Passion, as well as working versions of third album tracks like Hyena, Driver 8 and Wendell Gee.

Even so, it's an exponential leap to the 1995 Milton Keynes show from the Monster tour, their first for six years. Grunge had happened and REM were allied to if not actually part of it, a fact emphasised by their un-toured early 90s major label breakthrough sets Out of Time and Automatic for the People. They were big league and at Milton Keynes they showed why - What's the Frequency, Kenneth opens a blitzkrieg of a set, Drive is a blast, Revolution is huge, ditto Finest Worksong and Turn You Inside Out shows how this career reboot started out while the nimble Undertow offers rare intensity and Let Me In, Stipe's phone call to the departed Cobain, can still break your heart.

Four years later they headlined Glastonbury and paved the way for the festival's main stage to become the enormo-dome circuit's brightest feather in the cap. It's a good set, the closing Cuyahoga is inspired, but too often (Man on the Moon, Everybody Hurts, Losing My Religion) it feels over familiarity has bred content(ment).

Far better is the invite-only 2004 set recorded at St James' Church with a telling cameo from Thom Yorke on E-Bow the Letter and treatments of I Wanted to be Wrong, Aftermath and Boy in the Well that suggest there's more than enough good reasons to revisit the largely disregarded Around the Sun album.

The DVD makes the 60-min retrospective Accelerating Backwards film available commercially for the first time and also includes the 1998 Later… takeover along with some Top of the Pops appearances; and the whole thing comes with liner notes in which Beeb stars share their REM anecdotes and music writer Tom Doyle's overview of the band's marvellous arc.

REM At the BBC is a welcome addition to a carefully curated catalogue of special releases that confirm their subject as one of the most significant contemporary music acts to straddle the 20th and 21st centuries.