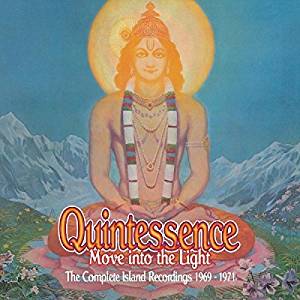 
Quintessence was one of the plethora of really interesting and adventurous late-60s "underground" bands who possessed their own proudly individual sound and identity, following their own muse in their own variation on espousing the "anything's possible" musical zeitgeist. Quintessence's mode of musical expression, though duly experimental, was basically jazz-flavoured rock with early Tull inflections liberally laced with Eastern influences. The latter element is probably what most set Quintessence apart from other bands dabbling with eastern musics and mysticism - their more conscious wholesale embracing of the Swami's universal philosophy in their lyrics as opposed to the more superficial, casual exoticism of - say - bands whose interpretation of eastern influence was confined to saturating the texture with sitar. (Indicatively, although a sitar player is credited on the first Quintessence album, he's barely audible for the most part.) It's the flute playing that gives the strongest and most consistent component of eastern flavour to Quintessence throughout, although some individual tracks on the first two LPs give unique, specially arranged musical experiences featuring treated tamburas (Midnight Mode), a female choir and oboe (Chant) and impassioned vocal chanting (Maha Mantra).

In a nutshell, Quintessence was formed in early 1969 in London's cosmopolitan Ladbroke Grove, a distinctly "happening" area. Vocalist/keyboardist Phil "Shiva" Jones (himself a blues-band veteran in his native land) answered an ad for hip musicians placed by flautist and fellow-Australian Ron "Raja Ram" Rothfield. The remaining members (guitarists Allan Mostert, Dave "Maha dev" Codling, bassist Richard "Shambhu Bahaji" Vaughan and drummer Jeremy "Jake" Milton) came on board fairly rapidly thereafter, the band were spotted rehearsing by Island's Chris Blackwell who was eagerly on the lookout for new talent, and they were signed to his label, giving them full artistic freedom. Quintessence recorded three albums and one single for the label over the course of a little over two years, and this latest anthology collects together all of these Island recordings, with a live version of 2nd-album opener Jesus, Buddha, Moses, Guaranga (which had appeared on Island's double-LP sampler Bumpers) thrown in for good measure. I may be wrong, but I think this is the first time all three LPs have been reissued in one convenient package (they came out on individual Repertoire CDs back in 2004).

For me, it's the band's innovatory debut album that gives what I'd term "the essence of Quintessence" in a form that's easily digestible for home listening. Sure, its ideas were not always fully developed, and some of the music was a touch tentative, but any listener who'd been enticed and drawn in by hearing the track Gange Mai on Island's sampler Nice Enough To Eat wouldn't be disappointed by purchasing the complete album. One of its songs, Notting Hill Gate, was re-recorded for a single, whose B-side Move Into The Light provides this set with its apt title.

Quintessence's second LP was the band's biggest seller, for all that it contained an uncertain mixture of studio and live performances (the latter undoubtedly a concession to the band's large fan-base who were more used to hearing them stretch out, improvise and jam on stage rather in the manner of one of their early inspirations The Grateful Dead, the bill for whose first UK appearance in 1970 they proudly shared.) In retrospect, the album feels something of a ragbag, with a couple of standard, if spirited guitar workouts from a 1970 live gig placed awkwardly alongside an excerpt from a projected, aborted "spiritual journey" opera and some more mature studio pieces such as Twilight Zones. Interestingly, album number three, 1971's Dive Deep, although originally intended as a "split" release with one live and one studio side, ended up as a wholly studio creation, containing six extended tracks (all but two lasting over six minutes) and including significant contributions from four Indian musicians, notably on the finale Sri Ram Chant. Equally interestingly, the music on Dive Deep stands up well today for its inventiveness and at times all-embracing fusion of musical elements. All this might be seen as ironic, since the band was then on the verge of a breakthrough into the US market on the strength of their live work; they had a keen following in that country, which included the Doors' Jim Morrison (coincidentally, we learn from the booklet essay, Quintessence had performed a cover of People Are Strange at early live gigs!). But this breakthrough never happened, due it would appear largely to management problems…

It's probably true to say that for the average rock fan, Quintessence (and yes, it was a curious choice of band name for a six-piece) is more widely remembered for the lavish, expensive packaging of its albums than for its actual music. A certain measure of the "all image, no substance" charge stuck, and as a result the band never quite obtained the listener-cred that it deserved, so this anthology is a great opportunity to reassess the band's music on its own terms and without the overwhelming visual distractions of the album sleeves. The set's booklet essay usefully incorporates exclusive new interview material too.