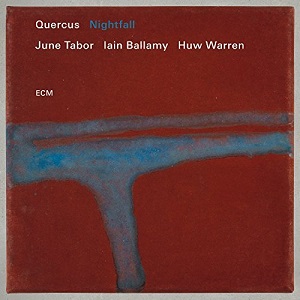 
This is the second album to be released by this teaming of three performers each of whom is regarded as superlative in her/his own field – singer June Tabor, sax player Iain Ballamy and pianist Huw Warren. Why quercus? Well, it’s defined as a genus of hardwood trees and shrubs that includes the oak – so I guess you could argue that their music is hardy, durable and sturdy and that they choose to perform music that withstands the tests and ravages of time. Here they move expertly and comfortably between folk and standards to Dylan and Bernstein, imparting a very special, and compellingly intimate, aura to their reinterpretations of these pieces. As befits the chamber-style scoring, this approach takes the best of both worlds – jazz and art-song – yet retains the immediacy of expressive communication that’s characteristic of the finest interpreters of folk song. The folk song purist may find it cool and detached by comparison, at least initially, and the drifting, free-wheeling, intelligently improvisatory stylings of the musicians may not appeal to those accustomed to conventional strummed folk accompaniment – or even some devotees of unaccompanied song. But trust me, it’s worth persevering!

Like its predecessor, this album was recorded on location, but at a temporal remove of almost a whole decade (between 2006 and 2015, although the former recording wasn’t released until 2013); during this time, the already intensely striking proven chemistry between the participants has if anything strengthened. There’s a consistency in expressive elan between the two recordings, even while the menu differs quite a bit between the two discs. While Quercus’ debut embraced settings of Shakespeare, Housman and Les Barker, a couple of standards and three traditional songs, its successor has a higher quotient of traditional song. However, a link is provided between the two records in that both open with a setting of Burns: on the first CD Lassie Lie Near Me and on the second a measured and beautifully sensitive, if austere and sombre, treatment of Auld Lang Syne. This is an object lesson in stripping back layers of convention and seeking – and finding – a fresh perspective to an often hackneyed or over-exposed text (although without necessarily entirely displacing the “accepted” reading). Fine though the Burns is, one of the most compelling items on the disc is the Dylan cover, Don’t Think Twice It’s Alright, where June’s uncannily perceptive interpretation really penetrates into the deeper, more resigned vein of melancholy residing in this (oft-undersold) lyric.

Another particular standout here is June’s brilliantly dramatized account of The Manchester Angel, where her faultless reading of the impact of each and every syllable really brings the narrative alive. June also shows her unqualified respect for her sources on the pair of pieces collected by Somerset folklorist Ruth Tongue (The Shepherd And His Dog and On Berrow Sands), as much as is in evidence on her tender, yearning take on West Side Story’s Somewhere (which reveals the quieter drama beneath the torchy surface of the song), or on the Don Raye standard You Don’t Know What Love Is. The empathy of collective interpretation extends both ways between June and Iain and Huw (both jointly and severally), and the responsive interaction is both highly natural and virtually implicit. To cite just a couple of examples: on June’s flowing yet animated take on the broadside Once I Loved You Dear, Iain’s inventive sax lines mirror June’s subtle decorations, while On Berrow Sands resounds with the shimmering sands, the tidal ebb and flow and the cries of the gulls, and The Cuckoo is replete with charming hints of the bird’s call echoing back and forth between piano and sax in counterpoint to the vocal line of this version (which June “collated” from the gypsy singer Queen Caroline Hughes). When June’s sublime voice demands a rest, Iain and Huw come into their own on the disc’s two instrumental excursions, of which I marginally prefer Huw’s moody tone poem Christchurch.

This is one of those records that demands concentration and commitment from the listener, at the very least equalling that of the performers. And yes, it’s apt to be listened to at nightfall. In that context alone, the acute pindrop stillness and poised precision of June’s delivery shows her still very much at the top of her game, and the associated contributions of Messrs Ballamy and Warren are so magically in tune with each other’s sensibilities that I feel sure there’s still plenty more mileage in the Quercus collaboration.