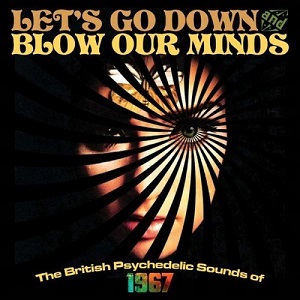 
According to popular rock history, 1967 was the year it all happened. Hmm… well it was certainly when the psych-ish brand of pop that had been nurturing in the underground clubs began to infiltrate the home-grown music scene mainstream in earnest. So here’s another of those juicy Grapefruit compilations that gathers together the best of all possible worlds – choice examples of every facet of British psych-pop under the sun (and out in the far reaches of the galaxy) recorded in that landmark year, reflecting the kaleidoscopic myriad of influences that weaved into the pattern of psychedelic ubiquity. Over the course of close on four hours of music, this copious three-disc set fairly blows our minds courtesy of a bewildering array of artists, some with overmuch personnel-shifting and a confusing provenance that would make a Pete Frame family tree look like child’s play!

The 80 individual acts inevitably include some of the big names, but their contributions come from way off the beaten track trodden by the run-of-the-mill compilations. For instance, the Moody Blues track (Life’s Not Life) comes from their transitional phase ’twixt beat combo and classical-prog; the Searchers’ Crazy Dreams is pure “beat-band dabbling in psych” territory; Zoot Money’s Dantalian’s Chariot, on The Madman Running Through The Fields, fully embraces psych mode in a quintessential mix of time shifts, gear changes and non-sequitur gestures; the Move’s Vote For Me is dubious political satire; and a Pre-Fire-God Arthur Brown lampoons the scene by exhorting us to Give Him A Flower. There’s also a couple of rare “extended versions”: Procol Harum’s first-album outtake Kaleidoscope is easily eclipsed by the Pretty Things’ Defecting Grey, here restored to its original over-five-minute ragged glory (and completely remixed in places for the edited 45) – now there’s an epitome of prime British psych if ever there was one. Next in the pecking order we find Dave Davies, one-hit wonders The Flower Pot Men (their unsuccessful Good-Vibrations-inspired followup A Walk In The Sky), The Honeybus (a charming early demo) and versatile second-divisioners Episode Six. The set also gives us plenty of chances to “spot-the-future-star”, with pre-fame appearances by Marc Bolan, Jon Lord, Bryn Haworth, Tony Christie, Steve Gibbons, Chris Cutler and David Bowie (with The Riot Squad) alongside some persistently pseudonymous creators who were either bound by contractual niceties or pure shame to remain thus uncredited. There’s also room for just a few of the year’s more familiar cult classics (like the storming uptempo charger Flames by Elmer Gantry’s Velvet Opera) which happen to be available on other CD reissues or compilations.

The set’s stacked high with a generous assortment of almost-made-it wrong-place-wrong-timers, genuinely inventive mavericks, cheeky chancers, unabashed opportunists and bandwagon-jumpers. There’s room for every strand of the dayglow patchwork tapestry of the psych Zeitgeist, from the worthy outpourings of legendary names-to-conjure-with like Skip Bifferty, Tintern Abbey and Fleur-de-Lys down to the wilful curiosities spawned by lesser mortals such as the perhaps-gratifyingly anonymous “QPR Supporters” (yep, that “F” word!), whose quasi-satanic chant was set to a pulsing freak-beat! The listener can also have great fun separating the coincidental sound-alikes from the shameless derivatives; the happy accidents and genuine serendipities from the blatant ripoffs (of which the wholesale plundering of Procol Harum/Bach on the track by Rupert’s People is a prime example). On the positive side, One In A Million’s punchy-psych Double Sight could’ve been The Who but for the prominent flanging; Our Plastic Dream’s Someone Turned The Light Out is seriously thrilling, Electric Prunes garage; and the tough Great Shadowy Strange by Jade Hexagram brings Arthur Lee’s Love to mind. The Fresh Windows deliver a trendy Troggs-Who hybrid on Fashion Conscious; The Brood apes Kinksy nostalgia; The Good Thing Brigade turns in a provocative mix of matchstickable Quo, Procol Harum organ sounds and weird Walrus-chaos; and Paul & Barry Ryan’s ambitious production-number Keep It Out Of Sight melds Spectoresque grandeur and castanet rhythms with Tomorrow Never Knows-style seagullerie.

Many of these tracks were, it turns out, but B-sides, to which the record companies seemed to insist much of the best music be relegated, nay unceremoniously banished. Some B-sides were considered too outré even for John Peel’s nascent Radio 1 show – although the Crocheted Doughnut Ring’s voguishly “experimental” concoction Nice might today be considered tamer than some of the more left-field utterances of King Crimson, Egg or Soft Machine. The issue of radio-station banning also comes to the fore on the deliciously quaint cult classic Granny Takes A Trip by Purple Gang, the famous John’s Children 45 Desdemona (which was denied radio play due to just one line that was considered mildly risqué) and the misinterpreted cautionary anti-drugs obscurity The Addicted Man by The Game. The era’s seemingly obligatory Eastern influences crop up on a couple of gems – the drifting acoustica of Focal Point’s plaintive ’Cept Me and Big Jim Sullivan’s wholly credible full-on sitar-scape Flower Power. A good number of tracks, while oddball in nature and content, manage to be both simply charming and interestingly musical (Busker Bill by The Truth, Emily Small by The Picadilly Line) or swooningly atmospheric (Neo Maya’s spectral I Won’t Hurt You and Felius Andromeda’s driven, brooding, cello-rich Meditations).

An arguably less endearing trademark of the era is its occasional degeneration into “lysergic lunacy”, whether in the shape of overly effects-ridden paisley-psych efforts like Geranium Pond’s Dogs In Baskets (where faintly ridiculous lyrics are a given) or nigh unlistenable tracks like The Riot Squad’s Toy Soldier, where David Bowie’s unstable, schzoid mix of Anthony Newley and Andy Warhol proves disturbingly unhealthy as it proceeds to go over-the-top in more senses than one. Some would-be-jokey, gimmicky chipmunky vocal antics also spoil The Marmalade’s otherwise honourably jangly Laughing Man. A more forgivable example of the fun novelty side of ’67 is The Uglys’ ribald tale of hunting exploits, And The Squire Blew His Horn, complete with fashionably cod-aristocratic accents.

This set also scores by celebrating some unsung minor masterpieces, a small clutch of archetypal 1967 should’ve-made-it one-offs. An earth-shattering finale to the whole set is provided by one of these, Sands’ Reaction-label B-side Listen To The Sky, which moves inexorably from a strange mix of Thunderclap Newman and Roy Wood-era Move via a siren-soaked cataclysm to a blazing pomp-rock Holstian epilogue. This track might even be regarded as an encapsulation of 1967 pop-psych…

So, Let’s Go Down And Blow Our Minds is an ace compilation, both entertaining and stimulating. OK, so several of the selections are determinedly minor-league, very much also-rans in the scheme of things but often no less persuasive for all that. A good number of the tracks will be new to cognoscenti of the genre, for even now the era is still slowly revealing its secrets. Serious collectors should note that over a third of the tracks sport a “not originally issued” label; these comprise label rejects, demos and early or alternate takes; some have surfaced before, but will need persistence in tracking them down. But this new set gives them due perspective and context by placing them alongside tracks that, by sheer luck, fate or happenstance, did make it to formal release status. And I just love the numerous incidental revelations that (sergeant) pepper the booklet, whose exhaustive notes, by David Watts, are absolutely first-rate having diligently unearthed much fascinating fresh detail regarding the recordings. This satisfyingly cranky cornucopia of 1967 contains glistening nuggets aplenty – so, a splendid time is surely guaranteed for all.