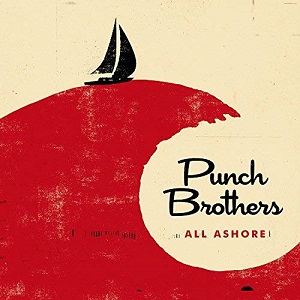 
For those of you who are already familiar with Punch Brothers, you will know that any release by these guys is something special. And for those of you yet to become acquainted, you have a lot to look forward to.

Although this quintet is made up of standard bluegrass instrumentation, their repertoire and imagination extend well beyond the loose concepts of genre. For me, the stand-out elements of the band have always been the sheer level of musicianship, and their immaculate approach to orchestrating each part and how it fits into the bigger picture.

One of my biggest worries about "All Ashore" was that each member has been involved in a number of side projects since the last album, and there is the potential to detract from the quality of their work together. I'm pleased to say that is certainly not the case. In fact, I would go as far to say the extra curricular activity has improved their already first-class chemistry.

The standout track for me is second in the running order, and aptly named "The Angel of Doubt". Perhaps one of the more pop influenced intros on the album; the lyrics in the first half are more personal and quite easy to follow. The instrumental textures flow seamlessly from passage to passage, that is until the second half of the song. The guitar and bass take up a riff which would find itself at home in a much heavier setting, but played on acoustic instruments it takes on a life of its own. The lyrics change as well into a stream of consciousness delivered from an altered perspective. This track demanded several immediate repeats.

The next track lands us in more familiar territory with a blistering progressive instrumental. This sort of writing has become a staple of the Punch Brothers sound, and is certainly as strong as one would come to expect from them.

Another highlight comes in the form of "Jumbo". A contemporary political satire delivered in the form of an upbeat groove, which demonstrates the songwriting prowess with some lovely tongue-in-cheek moments. It's great to see a range of comedy of tragedy displayed so cleverly, and you can tell from the first bar that this will be a barrel of fun at a live show.

This is the first self-produced album by the band, although Gabe Witcher has already earned a few producer credits on other projects. The production quality of this release is very subtle and understated, which is perfect for acoustic instruments. It doesn't present any barriers which might get in the way of immersing yourself in the music. The overall result is a listening experience where you feel an intimate connection to the material.

In summation, if you are a fan of acoustic music and approach this album with an open mind, you will almost certainly not be disappointed. With plenty of virtuoso moments from each player, the instrumental capacity of this band never ceases to amaze. The harmony throughout is well balanced and in parts you might hear a subtle "Beach Boys" influence in some of the chord voicings. The album as a whole is another step forward into their own domain. Punch Brothers are at a point in each of their careers where they are confident in their musical identity, and not afraid to do their own thing. It's refreshing to see an acoustic band of this calibre unafraid to push the limits of expectation, both in their live shows and in the studio.