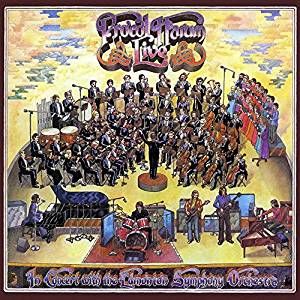 
This newly remastered, expanded reissue of the classic live album by Procol Harum was released at the end of October, just weeks after a 47-years-on re-staging, on 9th October 2018 at the London Palladium, of the original 18th November 1971 “symphonic concert” at the Northern Alberta Jubilee Auditorium in Edmonton, Canada. The 1972 LP taken from this live concert was one of the band’s most successful releases, and spawned the hit single version of Conquistador (the song itself dating from the band’s eponymous debut album). The B-side of that single, Luskus Delph, is included on this reissue as one of five bonus tracks. That same song also appears in a rehearsal take along with three other concert rehearsal session tracks, two of which (Simple Sister and Shine On Brightly) don’t appear on the main concert recording that formed the original LP release, either because not salvaged or for clear reason of quality.

There can be no denying that this ambitious concert was one of Procol’s finest hours creatively, even though it took a while for the band and orchestra to settle together. For the LP, two songs (Whaling Stories and Conquistador) were retaken immediately after the programmed concert sequence had ended. Result: at its best, the playing and singing was fiery, vigorous and committed, and Gary Brooker’s very special arrangements were proved truly epic in scale while easily avoiding any potential charge of overblown prog-pomp. The choir (the Da Camera Singers) were sparingly utilised, and all the more effective for it, making the occasional full-throated outburst (on Circus and the intro to Whaling Stories) all the more dramatic. The orchestral scoring was a model of sensitivity, not in any way merely striving for effect (perhaps even slightly under-used); the tricky “question of balance” had been solved by means of carefully proportioned, fully integrated (not token alternating) orchestral contributions and entries. All This And More gained an increased measure of gravitas, while Whaling Stories possessed all the majestic stature its earlier LP version had just hinted at. The episodic extended suite Inheld ’Twas In I retained coherence even while Keith Reid’s spoken sections may have felt mildly uncertain within this assured, broader canvas. In The Autumn Of My Madness in particular sound tremendous.

In Held T'was In