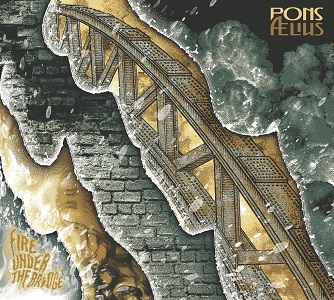 
Pons Aelius are a razor sharp six piece instrumental band, originally formed in Newcastle Upon Tyne, naming themselves after the Roman settlement alongside Hadrians Wall in what is now central Newcastle. FIRE UNDER THE BRIDGE is their second album release. The "Fire Under The Bridge" set of tunes opens, with Jordan Aikins' Great Highland Pipes and Sam Partridge's nimble flute instantly grabbing your attention. Equally impressive is the rythm section of Tom Kimber, Bevan Morris on Bass and Callum Younger's splashes and rattles on percussion. "Charlie Smith's Recovery" presents a lighter, breezy bluegrass side to the band with great interplay between Tom's rippling Mandolin and Sam and Jordan's Flute and Whistles. Straight away this album both urges and soothes. "The Ambassador Disaster" marries a rich banjo with a breathy choir of Whistle, underpinned by rock solid rythmn this travk steadily gains intensity. "Rafa's also starts light and breathy, skipping along on a steady but bouncing Banjo and Double Bass rythmn."

The Phantom Jake" is a pair of tunes that begins as a shimmerimng mirage of banjo with a trilling Jazz flute over the top. Jordan's Bagpipes add another layer, dancing through the track. "Interlude" is just that, a delicate track with a very Davy Spillane Whistle and some mesmorising and surprising percussion. "Five Miles To The Mill" opens with a killer Bass riff from Bevan Morris and some snapping snare drum percussion. The other players join in, with a great heads down race, but it's those huge Bass notes and percussion that really register with some great changes too.

"Elinor" is a slowly shifting piece, with great use of a subtle echo in the middle, soft against those dexterous strings, solid bass and finally swooping bagpipes. "The Glen Where the Deer is Imaginary" features very percussive, almost metronomic guitar strums and banjo while the Whistle and flute swoop over head. Whatever motivated the tune title that names this duo of pieces, the playing is mesmeric. In the change between tunes, the instruments take on a minimalism almost fluttering Terry Riley quality. "The Durbamuck Deer Chase" is an altogether more contemplative piece, at least at first, with "Quickly" the first tune a conversation between guitar and Bass. The second title tune of the set has Jordan's strident but never over powering pipes taking the lead, eitb the end being another guitar and bass conversation where the rest of the band joins in, till everyone is swirling around each other in a spirited closer.

Many is the time beautiful music is undersold by an average cover. Not so FIRE UNDER THE BRIDGE, the music and playing are complimented by a Dan Underwood image that evokes the bridges on the Tyne and the spirit of heavy industry in Stanley Spencer's painting of that other industrial river The Clyde. Every aspect of this album has been carefully considered and lovingly put together.