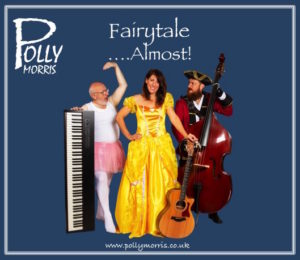 
I was lucky enough to be at the launch night for "Fairytale…Almost!" at the Bournemouth Pavilion Dance and quite a show it was. I use the word show because this was entertainment, washing lines, keyboards played with irons, blokes strapped to chairs and blokes in towels. Polly Morris with a full band and more, an ensemble piece with the spotlight on the individuals that made the album possible.

I'd also been lucky enough to share a studio with Polly Morris at Forest FM a few days before, just Polly and her guitar and a very poignant rendition of "A Million Tiny Things", so simple and so moving, I don't know how it sounded in radio land, in the studio a real tear jerker.

Headlining the Friday at the Fatea 30th Birthday Bash made it three in a row, when we helped each other get things ready, before Plastic Jeezus kicked things off and Polly Morris Band played another great show in two parts.

The reason this review has taken longer than I would have liked, is that I've not been able to separate the album from the live shows and a heart rending radio session, seeing the album live gives a perspective that you're not going to get unless you're lucky enough to catch a live show and then this weekend it clicked.

I'm narrative driven in the majority of my music context, story songs are what gets my attention and "Fairytales…Almost!" is definitely an album of ten great narrative songs, some comedy, some observational and some driven from the heart. What brought the album together for me was a line from Broadway, "Make 'em laugh, make 'em cry". Bang it all fell into place.

There's a lot of songs out there that move me, but few that make me laugh and smile, because few are written to do just that, partly because it's not that easy, particularly if you want them to appeal to an older audience, rather than kids. Yes there's a couple of cheesy lines in the comedy, but so what there's also many a true word said in jest.

More importantly the humour provides a striking board for the heartfelt songs, the ones that look at intimate issues such as the children growing up and did you do all that you could. It drives light and dark around the album. There's a lot of songs out there that draw on the darkside of the soul, siblings don't do well in songs, few that really make you smile, really smile, "Fairytale…Almost!" does and for that alone it's an album that I'm more than happy to say go out and get yourself a copy, then there's the ones that will make you cry…..job done.