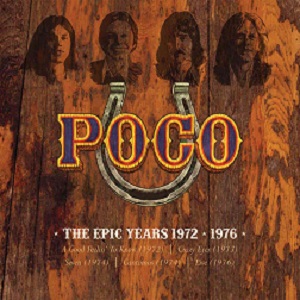 
This new five-disc collection gathers together under one convenient roof the final five out of the total of nine albums this solid-state and highly influential country-rock outfit released on the Epic label between November 1972 and April 1976: A Good Feelin’ To Know, Crazy Eyes, Seven, Cantamos and Live (although the latter was a contract-fulfilling exercise issued by the label after the band had already switched over to ABC Dunhill Records in early 1975).

Despite the benefit of hindsight, Poco can to some extent be judged one of those bands that were initially more the province of cognoscenti, before its period of greatest commercial success in the mid-70s (the “Epic Years” charted on this collection). But they fell between the stools rather, being a little too country for the mainstream (and for Eagles fans, come to that) but not quite roots-country enough for the hardcore country buffs. Poco came into being in 1968, when former Buffalo Springfield man Richie Furay teamed up with Jim Messina, Rusty Young, Randy Meisner and George Grantham. Though originally named Pogo after a comic strip, its creators forced a change to Poco and they recorded the album Pickin’ Up The Pieces, after which Meisner left to co-found The Eagles. Two albums later, Messina left, to be replaced by Paul Cotton, and after an ill-fated fourth album From The Inside (produced by Steve Cropper) things were set for success with the recruitment of songwriter/bassist Timothy B. Schmidt.

Album five, A Good Feelin’ To Know was recorded under a new and healthier production regime and with at least one potential hit single on board. This album, released in November 1972, is where this new HNE anthology starts. It represents Poco riding the crest of an artistic wave, with a consistent Cotton/Young/Schmidt/Grantham lineup (Furay departed in late 1973, having become disillusioned with lack of commercial success). The September 1973 album Crazy Eyes, the last to feature Furay, is widely regarded as one of Poco’s finest hours on record, with its epic 10-minute title song that paid tribute to Gram Parsons – and by coincidence was Furay’s brainchild as well as effectively his swansong with the band. The album Seven was a more rock-influenced affair, this sea-change brought on to a large extent by how well they needed to fit in with the rock spirit of the acts with whom they were sharing tour bills.

The band’s final album for Epic was the self-produced Cantamos, which placed a stronger focus on the four members’ vocal prowess within the approved template of melody-driven country-rock. Although Cotton was still the primary songwriting force in the band, Young was now coming on strong in that department too and his Sagebrush Serenade was a disc highlight. Finally, as I mentioned above, came the Live album, which brought out tapes of the band’s November 1974 tour in support of the Cantamos album – a faithful, if largely unsurprising selection of material that pleased the fans sufficiently to sell well alongside 1975’s ABC label debut Head Over Heels and the more satisfying, then-just-forthcoming Rose Of Cimarron (the opening medley on Live was something of a taster for that album).

Just a quick mention for the bonus tracks on this set – there’s a remix and a single edit on the first disc, and, on disc two, three cuts from the compilation The Forgotten Trail 1969-74 which are listed as remixes but then are unaccountably not referred to in the liner notes anywhere. Strictly completists’ territory those, I suspect, But I wonder, might we now anticipate the release of a “prequel” set of the first four of Poco’s Epic albums?